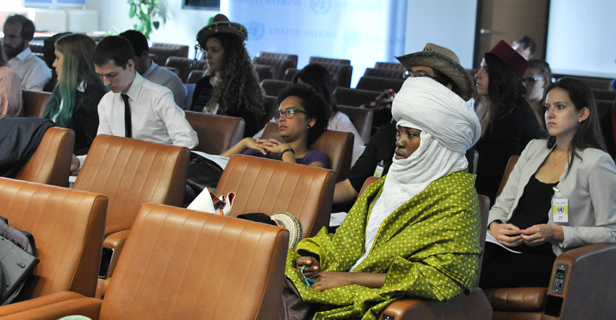 One hundred and thirty years ago, colonial powers met at the Berlin Conference to negotiate their claims to African territory. The conference represented the apex of what is known as the 'Scramble for Africa', and is a crucial starting point for understanding the challenges of modern Africa today.

Now, 130 years later, the Berlin Conference was recreated at the Vienna International Centre by students from the University of Vienna. The simulated conference was the culmination of an intense research and preparation phase. For an entire semester, students familiarized themselves with the geopolitical situation of the 19 th century, so that they could confidently represent the interests of their assigned country at the conference - some even came in costume.

The Berlin Conference was reconstructed as authentically as possible, albeit with one major twist. Several African states, which were not present at the actual conference, were given a voice at the re-enactment. The inclusion of new actors shifted the dynamics of the negotiations. One participant observed that the colonial powers - confronted with the interests of the colonized - had difficulty agreeing and were unable to form a bloc.

Wolfgang Gruber, who teaches the university course "International Development in the Historical Context" and moderated the negotiations, wanted students to explore what could have happened at the Berlin Conference. Expanding the scope of the conference was a way for students to not only represent their country's historic position, but adapt it to the challenges presented by the new voices.

In her opening remarks, the acting deputy to the director of the United Nations Information Service, Anne Thomas, said that Africa "has come a long way from the days of the Berlin Conference", and highlighted both the decolonization efforts of the UN and the progress made by African states within the framework of the Millennium Development Goals.