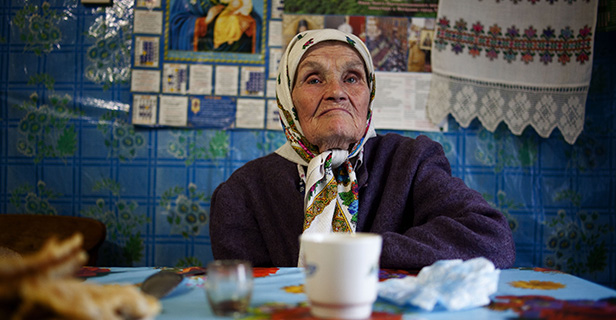 To mark the 30 th anniversary of the accident at the Chernobyl nuclear power plant on 26 April, Ciné-ONU Vienna presented "The Babushkas of Chernobyl", a documentary about a handful of aging women who defiantly chose to continue living in their ancestral homeland in the radioactive Dead Zone surrounding Chernobyl's Reactor No. 4. This 1,000 square mile exclusion zone has been deemed unliveable for the next 20,000 years. Nevertheless, the women took the risk upon themselves and returned shortly after the accident.

The film follows this group of women as they go about their daily lives in a not so normal situation. It shows the large-scale effect the disaster had, but particularly the lives of the individuals who could not bear the thought of being displaced forever. Despite the loneliness that comes with living in isolation since then, the film also gives an insight into the admirable connection these Babushkas have to mother earth and their strong community cohesion.

Following the film there was a panel discussion with the Secretary of the United Nations Scientific Committee on the Effects of Atomic Radiation (UNSCEAR), Malcolm Crick, the Head of Campaigns for the NGO Global 2000, Reinhard Uhrig, and the Austrian Nuclear physicist and former Director of the Atominstitut (AI) of the Technical University of Vienna, Helmut Rauch. The Director of the United Nations Information Service (UNIS) Vienna, Martin Nesirky, moderated the lively discussion.

The film was screened by the UNIS Vienna in cooperation with the Permanent Mission of Ukraine to the International Organizations in Vienna (Austria), This Human World (THW) Film Festival and Topkino.

Find out more about the work of UNSCEAR

Read more about the work of GLOBAL 2000 here

Find out more about the Atominstitut, Technical University of Vienna (ATI)