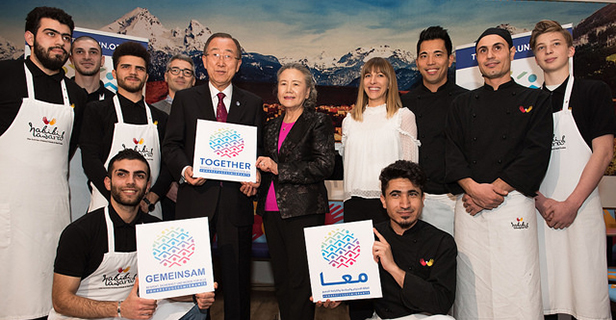 "When refugees are coming, they are not coming with problems, they are coming with a different culture, different religion, different skills and different potential, so they can be a good mix with the Austrian and local community. Austrian society, can be much more diversified, much stronger, much more resilient." With these words the UN Secretary-General Ban Ki-moon praised the team of the first restaurant by refugees for Austrians " Habibi&Hawara" who are an example of integration at work.

The restaurant as well as aiming to offer great food in a relaxed atmosphere also wants to enable refugees to transform themselves from being dependent to being fairly paid employees. The goal is to empower them to become independent entrepreneurs. The team of refugees and Austrians work in this unique restaurant in Vienna's first district, supervised by experienced business people and gastronomes.

Ban Ki-moon visited the restaurant on 8 December 2016 during his last visit as Secretary-General to Vienna. The event was organized to showcase the UN-system-wide campaign "TOGETHER: Respect, Safety and Dignity for All" which promotes diversity and inclusion.

The Secretary-General met the master chef and chef from the Philippines and Syria and was very impressed at how the restaurant is integrating refugees into Austrian culture.

The visit by the UN Secretary-General was the highlight of the team's year said Katha Schinkinger, the manager and initiator of the Habibi&Hawara restaurant. It was a great honour that Ban Ki-Moon came, she said: "The whole team worked very hard for this event and
it has welded us even more together."

The Secretary-General even shared the baklava he was served during the visit with one of the restaurant's bar staff, Raman Qutscho, who was very impressed by how humble Ban Ki-moon is. "The Secretary General knows how the refugees from Syria feel, I'm very happy that we could meet him in person," said Raman who comes from Syria and had been planning to study architecture before the war.

Civil society representatives from different integration projects also came to the restaurant to meet Ban Ki-moon. They had the opportunity to exchange ideas with each other and speak to the Secretary-General. There were people from magdas hotel, chancenreich, Red Cross, Kattunfabrik, Refugeeswork, Nachbarinnen, Ashoka as well as representatives from the UN Refugee Agency (UNHCR) Austrian office, the European Union Agency for Fundamental Rights (FRA), the International Organization for Migration (IOM)) and from the Austrian Foreign Ministry and Vienna City Council.

Like many others at the event, Gerry Foitik, the Representative of the Austrian Red Cross and Co-Initiator of the "Ideegration" awards for best initiatives to integrate refugees, was inspired by Ban Ki-moon's words of encouragement: "Please do not erect walls. Please build a bridge between people, among people and between countries. They have no other choice but to flee to save their lives to other foreign countries. We are living in a small world. We are all the same human beings, whether you are Syrian, whether you are European or Asian. We are all one. We are the same." 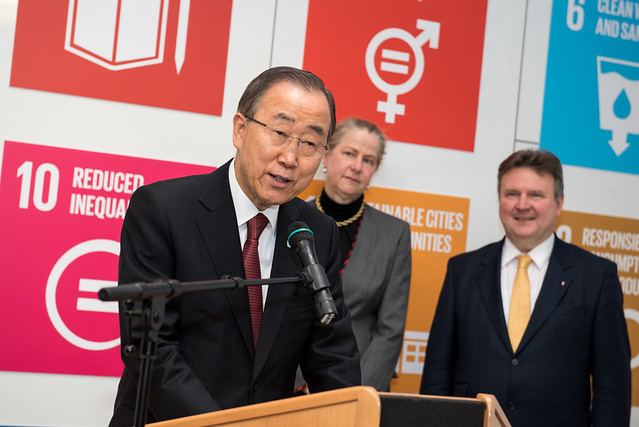