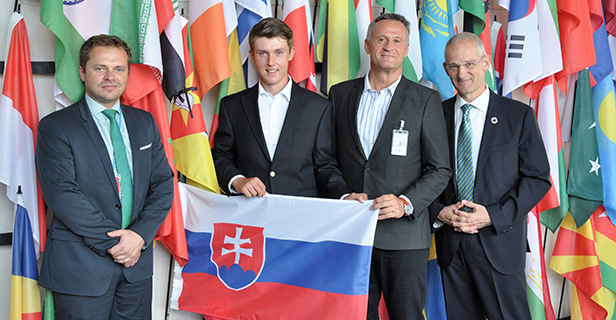 On 14 August the winner of the Human Rights Olympics English Essay Competition, Matej Čerman, from Slovakia visited the United Nations Headquarters in Vienna.  Matej, up against 40 other contestants, advanced through two prior selection rounds, district and regional, to win the final state-wide contest.

Held from 5 to 7 April 2017 at the Study and Congress Centre of the Centre for Lifelong learning of the Comenius University in Modra, this year's award ceremony included keynote speeches from UNIS Vienna Director Martin Nesirky and State Secretary at the Slovak Ministry for Education, Science, Research, and Sport Oľga Nachtmannová.

The Human Rights Olympics (HRO) is a yearly competition dating back 20 years. Each year there is a different theme to spread awareness of an important topic and to provide the contestants with material for their essays. This year, to encourage students to stand up for human rights, the theme was "Freedom of thought, conscience and religion in the context of democratic citizenship".

As in previous years, UNIS Vienna presented a theme for the English essay competition in support of the "Together" campaign. Launched in September 2016 by the United Nations and its 193 Member States, the campaign aims to promote respect, safety and dignity for refugees and migrants. Matej wrote an excellent essay presenting clear, intelligent, and convincing arguments about the importance of integrating refugees and migrants into communities.