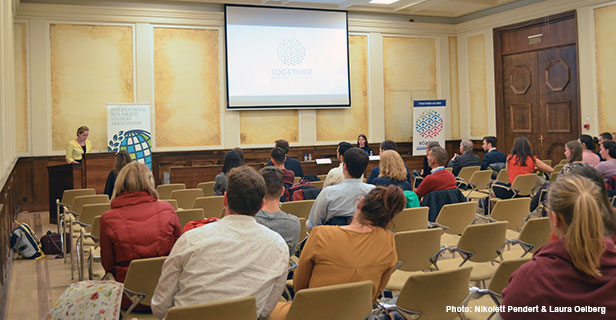 Students commemorate International Day of Peace by supporting the Together campaign

BUDAPEST, 29 September (UN Information Service) - The International Diplomatic Students Association (IDSA) organized a student event in Hungary on 21 September to promote the International Day of Peace. The event organized in partnership with the United Nations Information Service (UNIS) in Vienna was a great opportunity to join up the celebration of Peace Day with support for the Together campaign.

The event started off with welcome remarks by Judit Vadlövő, UNIS Vienna Consultant for Hungary, who read out UN Secretary-General António Guterres' message for the International Day of Peace and conveyed the greetings of UNIS Vienna Director Martin Nesirky. Afterwards the audience was shown a video: "Together: A global campaign to change perceptions and attitudes towards refugees and migrants".

The programme continued with a speech by the Regional Representative of UNHCR for Central Europe, Montserrat Feixas Vihé. She mentioned three important steps which can help put into practice respect, safety and dignity for all, which are: raising awareness of the fact that refugees are the same people as we are, supporting the host communities and addressing the fears of communities. Ms. Vihé added that every government has the right to protect its borders but not at the expense of refugees.

Then there was a roundtable discussion on the theme "Together: Putting into practice Respect, Safety and Dignity for all in our daily life". Taking part were Vice-President of the United Nations Association of Hungary, André Erdős and the first Hungarian Youth Delegate to the United Nations, András Volom. The discussion was moderated by Nikolett Garai from the Institute for Foreign Affairs and Trade.

Ambassador André Erdős expressed his appreciation for the organization of this timely event addressing the important topic of refugees and migrants. Talking about the negative narratives on refugees and migrants, Mr. Erdős said that one can poison people's mind so easily, but the healing process is a difficult and lengthy one. He referred to UN Secretary-General António Guterres' speech at the 72 nd session of the General Assembly where he said: "Refugees, internally displaced persons and migrants are not the problem. The problem lies in conflict, persecution and hopeless poverty." Mr. Erdős added that in a globalized world it is impossible to lock yourself in a single room, as many topics, including refugees and migration, like many others, have truly worldwide implications. Hungarian Youth Delegate Mr. Volom spoke about the need to consider people who are displaced across borders as a result of climate change, who may not meet the definition of a refugee as defined by the UN's 1951 Refugee Convention, which will need to be addressed in the future.

Answering the question of how we can bring the host communities and the refugees and migrants together, panellists stressed the importance of education and first-hand experience. They suggested that the best way for an ordinary citizen to promote the Together campaign was by supporting organizations that help refugees and migrants. The panellists agreed that it is important for young people to speak up in their local communities to mitigate negative perceptions towards migrants and refugees. 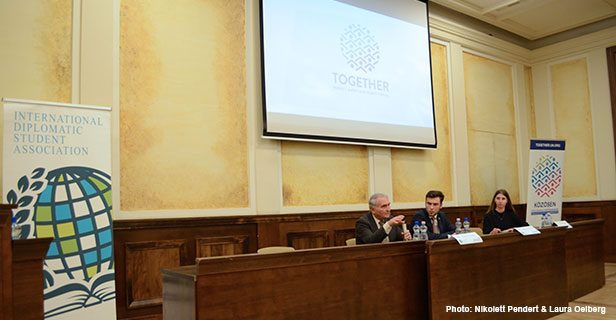