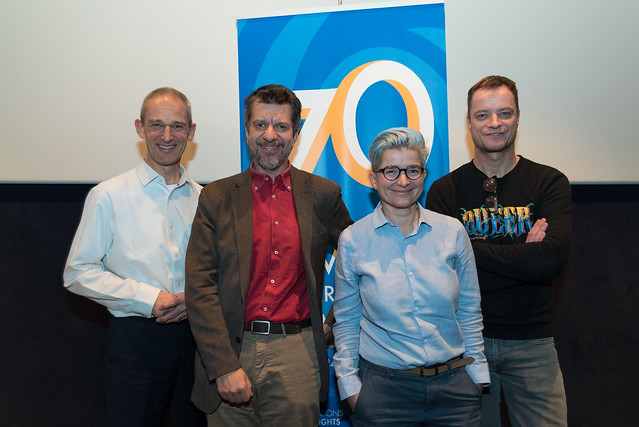 Rory 'Panti Bliss' O'Neill, well known drag queen and LGBTIQ activist in Ireland, came to Vienna for the Ciné-ONU Vienna film screening for Human Rights Day. Panti became the face of Ireland's campaign for marriage equality through a successful referendum in 2015. O'Neill and his alter ego Panti talks about his early life and his role during the campaign in the documentary "The Queen of Ireland' by Conor Horgan. In cooperation with the Permanent Mission of Ireland to the United Nations (Vienna), the United Nations Information Service (UNIS) brought the film to the Austrian public at Ciné-ONU Vienna on 10 December 2018 - the 70 th anniversary of the Declaration of Human Rights and Human Rights Day.

There was a lively panel discussion, after the film with Rory O'Neill, Marty Huber, Co-founder and Co-worker at "Queer Base - Welcome and Support for LGBTIQ Refugees", and Miltos Pavlou, Senior Programme Manager - Social Research at the Research & Data Unit at the European Union Fundamental Rights Agency. During the discussion O'Neill talked about the turning point in the campaign: "The most effective strategy was to change it from a debate to a conversation. (…) It's all about having conversations and that the right you are struggling for, does not take away other people's rights." In the Referendum on 22 May 2015, 62 per cent of people voted for same-sex marriage on a turnout of 61 per cent. This was the first time that a state legalized same-sex marriage through a popular vote.