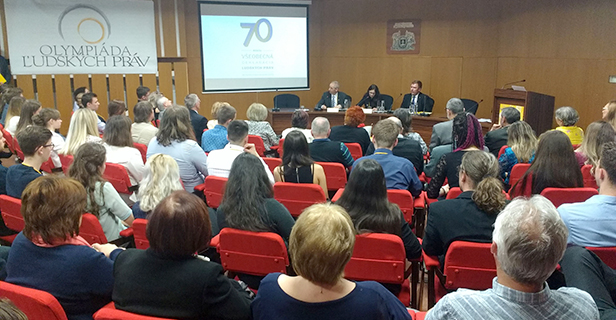 The Director of UNIS Vienna, Martin Nesirky, had two reasons to come to Slovakia on 11 April: to commemorate the 20th anniversary of the Human Rights Olympics, a nationwide high school competition, and the 70th anniversary of the Universal Declaration of Human Rights. "This year was special and we had excellent finalists," Kalman Petöcz, one of the Human Rights Olympics organizers and a former Slovak Ambassador to the UN in Geneva, told the Pravda daily.

The Human Rights Olympics draws approximately 4,500 participants from around Slovakia every year. UNIS Vienna has been cooperating, in various capacities, with the Human Rights Olympics since 2008, including as evaluator for the English-language essay-writing competition. The event, which was held this year at the Institute of Education of the Ministry of Justice in Trencin-Omsenie, was covered by several media outlets, including Pravda daily and RTVS public radio.

In his keynote speech, Martin Nesirky addressed some 140 students and teachers, including more than 60 finalists and regional human rights coordinators. He expressed deep admiration for the teachers and event organizers for their efforts, and also thanked students for their interest and engagement in human rights. He encouraged them to participate in the Stand Up campaign and to use the mobile application of the Office of the High Commissioner for Human Rights.

Mr. Nesirky told students that their passion and perseverance gave him great confidence in the future and that they hold all the tools needed to shape a better tomorrow with peace, justice and stability for all. He added that we should all follow their lead and strive to be true human rights champions.

His remarks were preceded by a video message on the 70th anniversary of the Universal Declaration of Human Rights from UN High Commissioner for Human Rights, Zeid Ra'ad Al Hussein.

The overall winner of this year's Human Rights Olympics final was Tomáš Ťapák, who also emerged as the winner of the UNIS essay competition on the topic "70 years of the Universal Declaration of Human Rights - highs and lows".

UNIS Vienna is a proud partner of the Human Rights Olympics and looks forward to welcoming the essay-writing competition winner, Tomáš Ťapák, at the United Nations in Vienna soon!