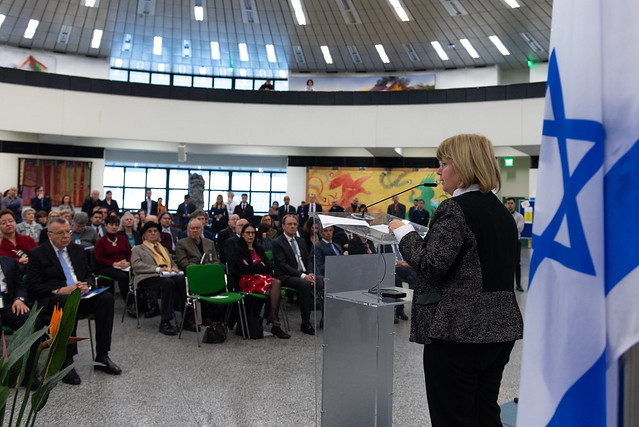 The exhibition, provided by the Holocaust and the United Nations Outreach Programme, showcases an educational initiative called "The Butterfly Project" developed by the Houston Holocaust Museum to teach the history of the Holocaust to young people, encourage them to remember the one and a half million children who perished and to stand up against hatred and prejudice.

Speaking at the event, the Director-General of the United Nations Office at Vienna (UNOV), Yury Fedotov, said: "The International Day of Commemoration is a day of mourning. The cruel murder of so many millions in the name of hate remains a fresh shock, one that we do well to recall with a renewed commitment to never forget and never allow, ever again. It is also a day for action, in memory of the victims, and to honour the courage of the survivors, the soldiers and other heroes who risked their lives." Ambassador Talya Lador-Fresher, Permanent Representative of Israel, said: "I deeply believe that commemoration ceremonies like this one are a good opportunity for us all to go back to the basics and remind ourselves of our roles, as diplomats and UN personnel working in this great building, the Vienna International Centre."

The ceremony also included a prayer by Chief Cantor Shmuel Barzilai and a musical performance by "Duo Shira" with Singer Shira Karmon and Guitarist Ronen Nissan. The United Nations Secretary General António Guterres' message for the day was read by Mr. Fedotov.

On 28 and 29 January, UNIS Vienna, in collaboration with the Permanent Missions of Israel and the Czech Republic to the United Nations (Vienna), also organized two screenings of the documentary "Dear Fredy". Fredy Hirsch was a proud Jew and openly gay man who with the deportation of the Jews to Ghetto Terezin (Theresienstadt) in the Czech Republic, was appointed head of the youth department and soon became widely admired by his students. He persuaded Dr. Mengele to set up a day care centre for children and young people and granted some 600 children their final moments of happiness.

The first screening was part of UNIS Vienna's Ciné-ONU monthly film screening, which took place at Topkino and was followed by a panel discussion with the film's director, Rubi Gat, Hannah Lessing, the Secretary General of the National Fund of the Republic of Austria for Victims of National Socialism, and the Deputy Director of the Terezin Memorial in the Czech Republic, Vojtech Blodig. The second screening took place at the Vienna International Centre.

During the panel discussion at Ciné-ONU, the film director explained why in his opinion Fredy Hirsch's story remained untold for so long: "I repeatedly asked my interviewees why nobody knows about him, and whether it was because of homophobia. The more they said no, the more I was sure that it was one of the reasons."