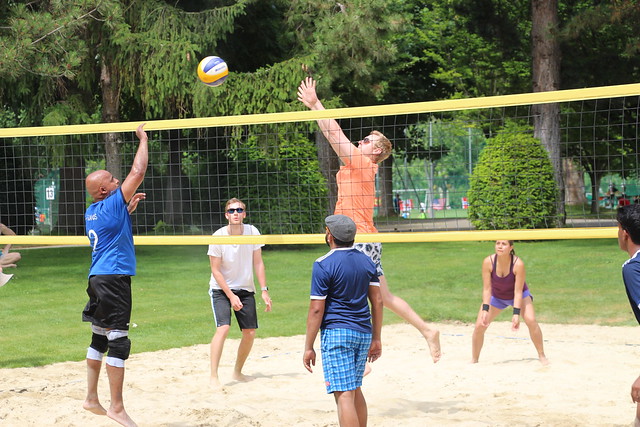 Sports day draws families from United Nations and Host Country together, as part of activities to mark 40th anniversary of the Vienna International Centre

It started with a football match between teams from the international organizations based at the Vienna International Centre (VIC) and the Austrian Foreign Ministry. It ended with a whole day of sporting activities attended by around 400 staff, family and friends, such are the powers of persuasion of the diplomats at the Austrian Foreign Ministry.

On the day there were more than 100 sportswomen and men taking part in the tournament. It included staff from the various UN organizations in Vienna, including the UN Office at Vienna (UNOV), UN Office on Drugs and Crime (UNODC), International Atomic Energy Agency (IAEA), UN Industrial Development Organization (UNIDO), Comprehensive Nuclear-Test-Ban Treaty Organization (CTBTO) and the Austrian Foreign Ministry as well as the City of Vienna. Mixed-gender teams competed in football, tennis and beach volleyball competitions at the Sportscenter DonauCity, right besides the Vienna International Centre.

“It was a friendly, positive sporting spirit which brought together the staff members of the VIC, Foreign Ministry and the City of Vienna,” said Teymuraz Gogolashvili, one of the main organizers of the event and Chief of Protocol at the UN in Vienna. Echoing the Olympic Games founder who said the most important thing is not winning but taking part, the participants had the chance to celebrate together in an amicable and enthusiastic manner.

Face-painting and handicrafts were some of the activities that the children enjoyed during the day, as well as football and other games just for the younger sportspeople. Each child received a special goody bag provided by the Staff Unions of the Vienna International Centre, the UN Office on Drugs and Crime Doha Programme and the City of Vienna.

As part of the VIC’s commitment to climate action, it was important that the event was environmentally sustainable. Leftover water, lunchboxes and goody bags were donated to the charity organizations Caritas and Gruft. Recyclable materials such as glass, paper, cardboard, metal, and plastic used at the event were disposed of according to UN standards with the support of the City of Vienna.

The day’s events would not have been possible without the overall organization of the UNOV Protocol Office and the support of the Austrian Foreign Ministry and the City of Vienna, the colleagues from the Buildings Management Service at the Vienna International Centre and the VIC Staff Unions.

At the end of the hot and sunny day of sports, the winning teams were also rewarded with medals and trophies.

The event was made possible with sponsorship from the United Nations Federal Credit Union (UNFCU) and contributions from Ströck, Eurest, Bank Austria and Schlumberger.