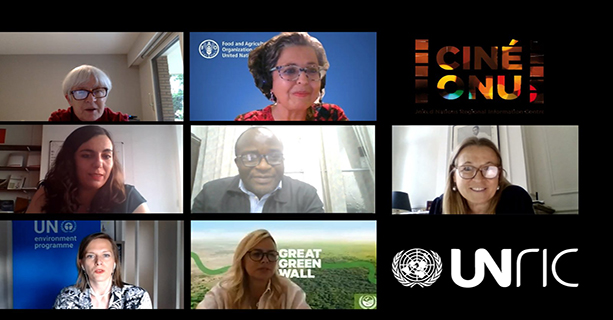 Virtual Ciné-ONU Screening of ‘The Great Green Wall’ – a story of resilience, optimism and collective action

To mark the launch of the UN Decade on Ecosystem Restoration and the World Day to Combat Desertification and Drought, Ciné-ONU Brussels, Vienna and Geneva hosted an online screening of the movie “The Great Green Wall”.

In the documentary, the main protagonist Inna Modja travels along the so-called Great Green Wall across the African continent. The singer from Mali visits several of the 11 countries where the “wall” of planted trees and grass is already in place to help combat desertification.

Starting from West Africa and traversing to the eastern part of the continent, Inna meets many people who share their experiences with creeping desertification, and their concerns and vision for the future. Cultivating trees is tied to economic as well as ecological improvement, helping to combat forced migration, conflict and hunger. The better the living conditions, the less the inhabitants will become victims of drought, hopelessness, and paramilitary groups targeting the most vulnerable. Throughout the movie, the continent´s inhabitants display an uplifting spirit full of hope and resilience – the collective action of a generation seeking to control their own destiny.

Through the project, Elvis Tangem said, a region that used to be neglected gained the attention of policymakers. He also emphasized that besides money, human capital is essential. He called for urgent action: “We need to bring back the soul of the ecology and the soul of the ecosystem.”

Sandra Kramer described the movie as life-changing. The Great Green Wall initiative was not only about planting trees. It was also about stability, sustainability, and security, she said.

The Great Green Wall that snakes across the African continent’s Sahel region is not complete yet but already a reality in many places, noted Nora Berrahmouni. She said bare land without life had been transformed into a region providing trees, food production opportunities, and forest products for around one million farmers. She called for continued support, equipping the communities on the ground, regardless of age or sex, to restore the degraded land into fertile soil.