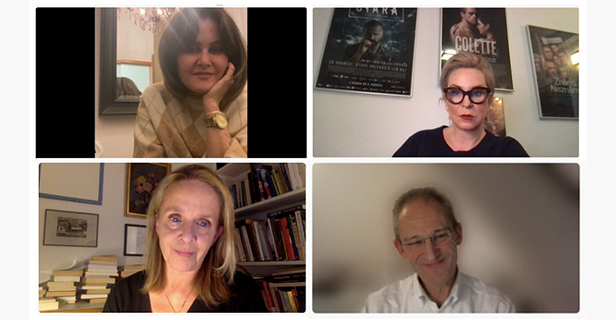 “Human rights in general, and women´s rights in particular, are the core of everything.” Ciné-ONU Vienna and Budapest film screenings of “Parlika” marks Human Rights Day

“The United Nations stands for the rights of every member of our human family. Today and every day, we will continue to work for justice, equality, dignity and human rights for all,” said United Nations Secretary-General António Guterres in this year's message to mark Human Rights Day on 10 December. (Read the full message here).

This message resonated with viewers at the Ciné-ONU Vienna and Budapest screenings on 6 and 10 December of the documentary “Parlika” by Slovak-Afghan film director Sahraa Karimi to mark Human Rights Day 2021. The screenings and subsequent discussion with panellists were held virtually due to COVID-19.

The 2016 production tells the story of Suraya Parlika, an Afghan woman who had the courage to enter Afghan politics and remained a women’s rights activist during and after the Taliban control in the country. The documentary explores the status of women during a very turbulent time in Afghan history, detailing the process of transformation to a democratic country after being under Taliban control and how women continued to be subjected to gender-based violence.

The virtual Ciné-ONU film screening of “Parlika” in Vienna was organized by the United Nations Information Service (UNIS) Vienna in cooperation with the Permanent Mission of Slovakia to the UN (Vienna). The screening was followed by a panel discussion with film director Sahraa Karimi, Wanda Adamik Hrycova, film producer and acting President of the Slovak Television Academy who helped Sahraa Karimi to flee from Afghanistan in 2021, and Petra Ramsauer, journalist and author. The panel discussion was moderated by UNIS Director Martin Nesirky. Before the screening started, Ambassador Radomir Bohac, Permanent Representative of Slovakia to the UN (Vienna), delivered opening remarks, highlighting the importance of protecting the fundamental rights of Afghan women and girls.

During the discussion, Karimi explained that it has been important to her as an Afghan woman to be a “storyteller of my own people” and therefore convey Parlika´s story to the next generations. She produced the film with limited resources, interviewing Parlika for four days. She also said that she continues making films about her country, as she wants “to remind the world about Afghanistan”. Speaking about Afghanistan’s future, Karimi emphasized her belief that: “Human rights in general, and women´s rights in particular, are the core of everything.”

Hrycova recalled the story of her involvement in Karimi´s escape from Afghanistan earlier this year. Having never met Karimi personally, Hrycova shared a post of Sahraa on her social media profile, which eventually helped Karimi and other filmmakers to leave the country. She also raised concerns about the short attention span of people for the suffering of the Afghans, especially women. Hrycova argued that filmmaking provided a powerful tool for raising awareness for pressing issues. Moreover, Hrycova explained that she and Sahraa decided to make a film about how Sahraa left Afghanistan to try to “touch the soul” of the audience and “send a message to the world”.

Ramsauer contributed to the discussion with her perspective as a journalist who has worked in Afghanistan and her insights from studying psychotherapy. She focused on the role of mental health stating that it is “breathtaking how resilient people can be, especially women”. Ramsauer also pointed out “two levels of trauma” that she saw represented in a scene in the documentary. She distinguished between the trauma related to the “atrocity you are surviving” and the fact that “nobody cares”. So, she considered it to be “the most important job as a journalist, and as a filmmaker to show that we care” and it was crucial to “pay more attention” to Afghanistan in the future.

UNIS Director Martin Nesirky highlighted the UN’s work on the ground in Afghanistan including on  women´s rights, by organizations such as the World Food Programme, UNICEF and the International Organization for Migration (IOM). He also underlined the role of the local women staff in the region and the importance of women and girls in building societies.

The first-ever Ciné-ONU Budapest event on 10 December also featured a screening of ‘Parlika’. It was organized by UNIS Vienna in cooperation with International Diplomatic Student Association (IDSA) and followed by a panel discussion with Péter Marton, Associate Professor at Corvinus University in Budapest, with Afghanistan as one his main research fields; and Máté Szalai, Coordinator of the Middle Eastern and North African Research Programme at the Institute of Foreign Affairs and Senior lecturer at Corvinus University who was also the moderator of panel. UNIS Director Martin Nesirky joined the opening of the event and thanked IDSA and the panellists for their cooperation and participation in the kick-off event of Ciné-ONU in Budapest.