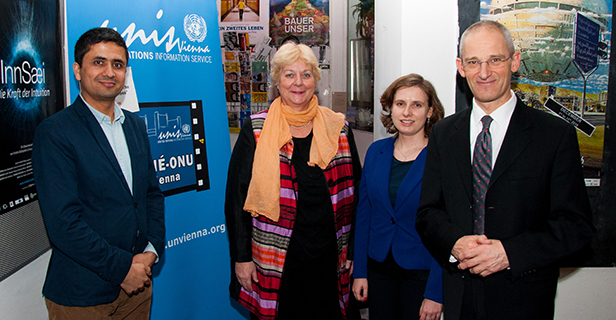 Survivor of Cruelty: Ending Violence Against Women - Ciné-ONU Vienna Screening of "A Girl in the River: The Price of Forgiveness"

"I have never heard of a girl who has been thrown in the river and lived to tell the tale," says Saba, who is the central character of the documentary "A Girl in the River: The Price of Forgiveness".

Told through the lens of a love story, the film examines the tensions between modernism and tradition in Pakistan and follows the young Pakistani woman, who has survived her attempted "honour killing" by her own family.

The film received the prize for Best Documentary Short Subject at the 2016 Academy Awards and was screened on 21 November 2016 at Ciné ONU Vienna to mark the International Day for the Elimination of Violence against Women (25 November).

In Pakistan, more than 1,000 women perceived as having compromised the "honour" of their families are reported to be killed each year. Victims are often pressured to forgive and absolve the aggressors, which allows them to return to the community.

The screening was followed by a discussion with Martina Gredler, who chairs the  Vienna NGO Committee on the Status of Women, Ali Ahmad, Researcher and Director of the Peace Museum Vienna and Andrada Filip, Project Coordinator at Women against Violence Europe (WAVE). The Director of the United Nations Information Service (UNIS) Vienna, Martin Nesirky, moderated the discussion.

Martina Gredler said that it was horrible to realize what happens to women in this world in the year 2016. But, she said, it was also important to start the discussion in a positive way: "It is easy to complain now after these horrible scenes about the system and the ignorance but we have to look for solutions, my focus is: what can we do?". With this message she introduced the orange campaign - an initiative to fight for 16 days (25th November-5th December) against violence against women by wearing orange.

Andrada Filip from WAVE encouraged everyone to raise awareness about violence against women. "We need to work with men and elders of the societies and educate people to change something." In the film Saba's first lawyer said, "If they are sentenced to five years and then come out and try to kill her again, who is going to protect her?" In reference to this Andrada drew attention to the fact that there are rarely shelters in many countries and if they exist it is very hard for women to leave the shelter and continue with their lives.

Ali Ahmad talked about the situation in Afghanistan and said that violence against women is not only a problem in Pakistan, but a global problem: "The patriarchal belt that spans from north Africa to some areas in south China is confronted with these issues." But he also explained that a lot of violence is also committed by women themselves against each other. "In the film Saba's sister does not show sympathy for her, because the situation affects her as well," he said. It is a fear-based system and the sister is afraid that the situation also brings dishonour to herself and that she would not be able to marry as a consequence.

The reactions to Sharmeen Obaid's documentary "A Girl in the River" gives a glimpse of hope. The Pakistani government had repeatedly promised to take action to close legal loopholes around so-called "honour killings", after the documentary was released. And they kept their promises. On 6th October 2016 Pakistan's parliament passed a landmark bill which guarantees mandatory prison sentences of 25 years for convicted murderers even if the victim's relatives forgive them, a practice that has allowed thousands of murderers to be freed.

Sharmeen Obaid paid tribute to the people who had worked to get the bill through and commented on Facebook: "It may not change much overnight but it is certainly a step in the right direction. And today I am proud that we have gone the distance on this bill."

The Vienna screening was the film premiere of "A Girl in the River: The Price of Forgiveness" in Austria, organized by the United Nations Information Service (UNIS) Vienna in cooperation with This Human World (THW) Film Festival and Topkino.

More about the documentary

More information about the Orange Day