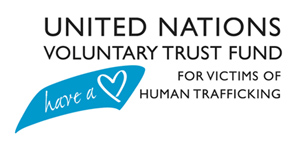 NEW YORK/VIENNA, 3 November (UN Information Service) - On 4 November 2010 at 3 p.m. at United Nations Headquarters in New York, the United Nations Office on Drugs and Crime (UNODC) will formally launch the UN Voluntary Trust Fund for Victims of Trafficking in Persons, especially women and children ( www.unodc.org/unodc/en/human-trafficking-fund.html). The Fund is one of the most important elements of the new United Nations Global Plan of Action to Combat Trafficking in Persons adopted by the UN General Assembly on 30 July 2010.

The Fund will provide humanitarian, legal and financial aid to victims of human trafficking, and be managed by UNODC, with the advice of a Board of Trustees appointed by the UN Secretary-General.

Celebrated humanitarians and actors Demi Moore and Ashton Kutcher will lead the Fund's kick off at the UN on 4 November along with the General Assembly President Joseph Deiss, UN Secretary-General Ban Ki-moon, New York Times Pulitzer Prize winning author-journalist Nicholas Kristof and UNODC Executive Director Yury Fedotov, among others. Also attending the launch will be civil society leaders who have championed trafficking victims' rights, as well as experts from academia and law enforcement, private sector supporters of the cause, and survivors of modern day slavery.

The event will be webcast at www.un.org/webcast

Ms. Moore and Mr. Kutcher have demonstrated a strong commitment to the fight against human trafficking. They created "DNA", the Demi and Ashton Foundation, which aims to raise awareness about child sex slavery worldwide, change the cultural stereotypes about the issue, and rehabilitate victims. "Freedom is a basic human right and slavery is one of the greatest threats to that freedom," Mr. Kutcher said. "No one has the right to enslave another person," said Ms. Moore.

UNODC invites all Governments, Foundations, and the Private Sector to generously pledge contributions to the Trust Fund. Pledges will be announced at the launch of the Trust Fund.

Those wishing to make a pledge are requested to contact Ms. Simone Monasebian, Chief of the UNODC New York Office, at 1-212-963-5631 ( monasebian@un.org).

The fund-raising slogan for the Trust Fund will be "Have a Heart for Victims of Human Trafficking" making a clear reference to the Blue Heart, which is rapidly becoming an international symbol against human trafficking.