VIENNA/ NEW YORK, 5 April (UN Information Service) - Africa's urban population will increase from 414 million to over 1.2 billion by 2050 while that of Asia will soar from 1.9 billion to 3.3 billion. Both regions together will account for 86 per cent of all increase in the world's urban population according to the 2011 Revision of the World Urbanization Prospects , launched by the United Nations today.

This unprecedented increase in urban population will provide new opportunities to improve education and public services in Africa and Asia, as more concentrated populations become easier to reach. However, this will also pose new challenges of providing urban jobs, housing, energy and infra­structure to mitigate urban poverty, expansion of slums and a deterioration of the urban environment.

With half of humanity living in cities today, urbanization is a critical issue for Rio+20 - the United Nations Conference on Sustainable Development - which takes place on 20-22 June in Rio de Janeiro, Brazil. Cities are where the pressures of migration, globalization, economic development, social inequality, environmental pollution and climate change are most directly felt. Yet, at the same time, they are the engines of the world economy and centres of innovation where many solutions to global problems are being piloted.

According to Sha Zukang, Secretary-General of Rio+20: "The launch of the World Urbanization Prospects is timely because world leaders, along with thousands of participants from governments, the private sector, civil society organizations and other groups, will come together to shape how we can reduce poverty, advance social equity and ensure environmental protection on an ever more crowded planet. We expect world leaders to come up with concrete action plans to realize sustainable cities for the future we want," he said.

The largest increases in urban population are expected in the following countries: India, China, Nigeria, the United States of America and Indonesia. Over the next four decades (2010 to 2050), India will add another 497 million to its urban population; China - 341 million, Nigeria - 200 million, the United States -103 million and Indonesia - 92 million.

For the first time, the 2011 Revision of the World Urbanization Prospects includes geographical coordinates for all cities with more than 750,000 inhabitants. This will allow researchers to link estimates and projections of the population in urban agglomerations to various environmental characteristics, such as proximity to coastal areas, earthquake faults or climate zones.

An initial analysis found that among 450 urban areas with 1 million or more inhabitants in 2011 (representing 1.4 billion people), 60 per cent, or about 890 million people, are located in regions exposed to at least one major type of natural disaster risk.

Cities in Europe and Africa are the least exposed overall. Only 26 per cent and 37 per cent, respectively, of their cities with one million inhabitants or more are living in regions exposed to at least one major type of natural disaster risk. However, cities in Latin America and the Caribbean, in Northern America, and especially in Asia are often located in regions exposed to natural hazards. 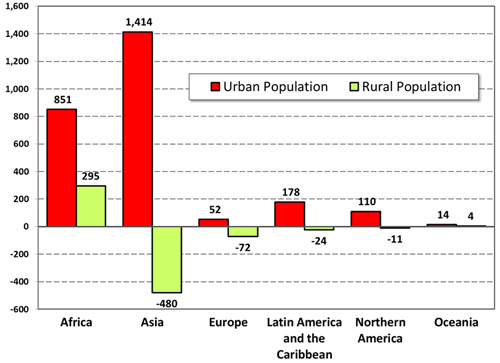 For more on the results of the 2011 Revision of the World Urbanization Prospects, visit www.unpopulation.org or directly at: http://esa.un.org/unpd/wup/index.htm

For more information on the Rio+20 Conference, visit: www.uncsd2012.org/