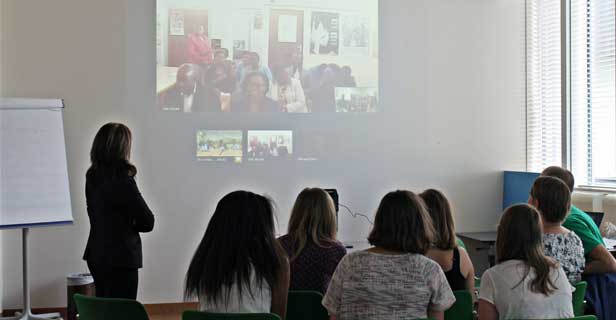 Young people from Vienna, Nairobi and Harare discuss the drug problem via WebEx

What kind of effects does drug abuse have on young people and how can we effectively support young drug users? These kind of problems were at the heart of an 'online conference' with participants from two continents to mark the International Day against Drug Abuse and Illicit Trafficking 2014.

The webinar, moderated by UNIC Nairobi, addressed the topic from several perspectives. Experts from the United Nations Office on Drugs and Crime (UNODC) and local institutions, police officers, parents, teachers, members of non-governmental organizations (NGOs) and students all contributed to the debate by sharing their own points of view on how to implement support services and prevent people becoming drug users.

"It is important to make these young people understand that they are not alone and support them," said one of the students who participated in the debate from Vienna.

Similarly, Steve Mueller, drugs counsellor at the Viennese Drugs Service Suchthilfe, stressed the importance of establishing a dialogue with young people from the earliest stages of dependence: "We should already start working with drug users who don't think that their abuse is problematic because they just want to feel better."

All the participants agreed that the main cause of drug abuse was peer pressure, stress and the social environment. Both the NGO and UN experts agreed on the importance of working on preventive mechanisms involving various stakeholders such as school, parents and teachers and to share information so they can help young people in an effective and comprehensive way.

As the UNODC Associate Expert on drug prevention, Hanna Heikkilä stressed: "Before creating new support services, we should start working with the infrastructure and information that we already have globally and locally; meaning the existing institutions and scientific materials available on drug abuse and young people."

Finally, UNIC Nairobi wound up the session by highlighting the similarity of the phenomenon of drug abuse worldwide and called upon all participants to keep on sharing information and carry on the debate in the future.