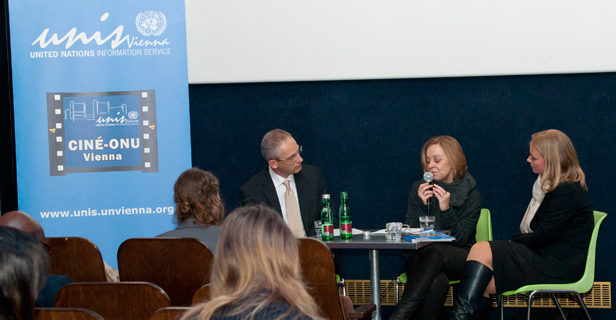 When an enemy becomes a  friend: Cine-ONU film screening of "The Captain and his Pirate"

Can an enemy or perpetrator become a real friend? Can this person understand you better than your own team?  How does a hostage feel after being released, and how is it possible to get back to a normal life?

The drama of human relationships, the psychological rehabilitation of the victims of hostage-taking as well as the current problem of piracy in the world were all encapsulated  in the documentary "The Captain and his Pirate" by German filmmaker Andy Wolff, screened on 9 February 2015 at Topkino as a part of the Cine-ONU initiative.

This movie is a touching, deeply introspective journey, taking place at a makeshift pirate camp in a Somali desert and at an experimental German psychiatric hospital. In these remote places two men, the eloquent pirate leader Ahado and the troubled former captain Krzysztof Kotiuk, share with the audience the harrowing details of the four months they spent together as captive and hostage-taker aboard the Hansa Stavanger cargo ship.  While struggling to come to terms with their strange bond, the two men discovered the overriding human need to be understood and to understand someone else, something much more powerful than social or moral norms.

The panel discussion after the film, moderated by Martin Nesirky, Director of the United Nations Information Service (UNIS) Vienna, brought in experienced experts from the fields of clinical psychology and combating  maritime crime: Professor Brigitte Lueger-Schuster from the Faculty of Psychology at the University of Vienna and Siri Bjune, Programme Officer at the Justice Section, United Nations Office on Drugs and Crime (UNODC).

"The producer of this documentary has developed a very good understanding of the psychological relations and social bond between two people sharing a dangerous situation. They have found the way to survive and handle the hostage situation together," -  said Professor Lueger-Schuster from a point of view of a clinical and health psychologist. Lueger-Schuster also explained the so-called "Stockholm syndrome", the psychological phenomenon in which hostages develop sympathy and positive feelings for the perpetrator. "Once you are betrayed from the outside, you have to start trusting each other,"  described Lueger-Schuster.

Siri Bjune highlighted the work and achievements in combating piracy and managing capacity-building in the affected regions by the Maritime Crime Programme (MCP) of the United Nations Office on Drugs and Crime. The programme assists states in strengthening their capacity to combat maritime crimes and its activities include ongoing counter-piracy and maritime capacity-building in the Horn of Africa and Indian Ocean regions.

"Thanks in part to work of the programme, there were no successful pirate attacks in the last two years. This is due to ongoing prosecution of the pirates, patrolling of the sea and coasts by the European Union and NATO forces, and the sharing of best practices such as how to avoid ships being captured by pirates."

Besides combating maritime crime and focusing on the criminal aspects of the problem, an important field of the work of the Maritime Programme by UNODC and the United Nations Trust Fund on Piracy is capacity-building for the affected countries and communities and providing alternative solutions and livelihoods to prevent people earning a living from piracy, especially in Somalia. "We are looking into broader geographical prospects, working together with coastguards and maritime police as well as with prisons in the countries to help lead former and current perpetrators away from committing the crime again," said Siri Bjune.

The Screening of "The Captain and his Pirate" documentary was organized by the United Nations Information Service (UNIS) Vienna in cooperation with This Human World Film Festival and Topkino, and supported by the Permanent Mission of Germany to the United Nations (Vienna).