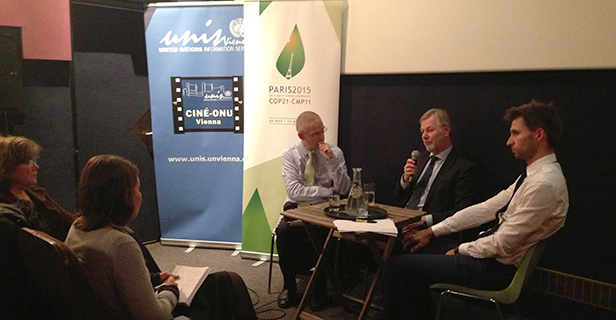 Vienna, 23 November 2015, Just one week before the start of the UN Climate Change Conference (COP21 in Paris),Ciné-ONU Vienna presented the Austria premiere of the documentary "Ice and the Sky" at the local arthouse cinema, Topkino.

The film tells the true story of Claude Lorius, a far-seeing glaciologist and climate specialist, who was one of the first people, who studied the ice in the Antarctica. Today, now in his eighties, he is fighting with undiminished passion to save one of the Earth's greatest ecosystems - and to show how the Earth is heating up and the ice is melting. Lorius' mission began in 1957 with the first of many expeditions. His ice core drilling, which later extended to a depth of 3600 metres, supplied transcripts of hundreds of thousands of years of climate history. They are the basis for everything we know today about the Antarctic. "Now that he is 83 years of age, I feel like going back in the past with him to recount his story: to travel along the timeline of his life, as a genuine reflection of our planet history," said the film's director, Luc Jacquet.

The film screening was followed by a panel discussion with Helmut Hojesky, Head of the Department for Climate Change and Air Quality in the Austrian Ministry of Agriculture, Forestry, Environment and Water Management (BMLFUW) and Matthias Jurek, GRID-Arendal Expert at the United Nations Environment Programme (UNEP) Vienna Programme Office - Secretariat of the Carpathian Convention, moderated by Martin Nesirky, Director of the United Nations Information Service (UNIS) Vienna.

Helmut Hojesky said that he is quite optimistic about the possible outcomes of the COP21 conference in Paris. According to him, the possibility for reaching an agreement in Paris is quite likely as many countries have submitted their national climate plans, the so-called INDC's (Intended Nationally Determined Contributions) to reduce their carbon dioxide emissions and thus help to achieve the target of limiting the global temperature rise to less than 2 degrees Celsius. For the implementation of such an agreement, a common reporting system with special solutions is needed, as well as climate financing, because the poorest countries need support for adaptation matters, said Hojesky. "The message is quite clear, we have to act," he added, referring both to the main message of the film and COP21.

Matthias Jurek stated that his office already works on adaptations for developing countries and mentioned what has been done so far by UN Environment Programme. He emphasized that technology assistance and financial mechanisms are crucial and that general awareness of the problem is an important factor as well. He concluded with saying that the costs of inaction "are enormous and the damage will be more expensive than the measures taken".

UNIS Director Martin Nesirky told an anecdote about travelling with the Secretary-General to the Kiribati islands, where they found lifejackets instead of chocolate on their pillows in the hotel, just one sign of the real dangers of climate change facing this poor island nation in the central Pacific Ocean, where the land is only one or two metres above sea level.

Ciné-ONU Vienna is organized by UNIS Vienna in cooperation with Topkino and This Human World Filmfestival.