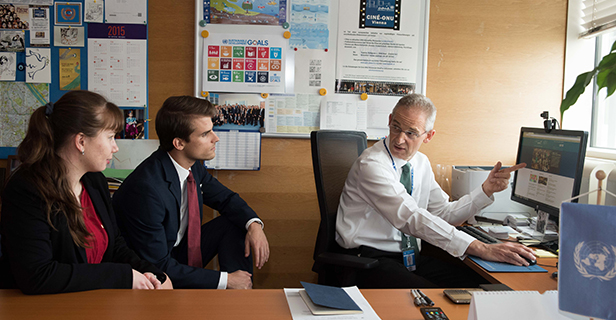 More than one hundred students from Austria, Hungary, Slovakia and Slovenia participating in this year's Shadowing Programme

VIENNA, 24 November 2015 - For the fourth year a variety of university students had the chance to participate in the Shadowing Programme at UN Headquarters in Vienna. One hundred and thirty one students from 16 universities in Austria, Hungary, Slovakia and Slovenia were invited to "shadow" 74 UN Staff members for one day between 24 October and 24 November. This year's programme was particularly important as the United Nations is marking its 70 th anniversary.

The UN Staff members who took part represented a variety of the Vienna-based UN Organizations. This year volunteers came from the International Atomic Energy Agency (IAEA), the United Nations Office at Vienna (UNOV), the UN Office on Drugs and Crime (UNODC), the Office for Disarmament Affairs (UNODA), the UN Information Service (UNIS), the Preparatory Commission for the Comprehensive Nuclear-Test-Ban Treaty Organization (CTBTO), the UN Industrial Development Organization (UNIDO), the UN Refugee Agency (UNHR), the UN Environment Programme (UNEP), and the UN Office for Outer Space Affairs (UNOOSA). In addition to the VIC-based organizations the Permanent Mission of Costa Rica as well as the OPEC Fund for International Development (OFID) participated in the Shadowing Programme.

As part of the Shadowing Programme all students were invited to join a free guided tour of the Vienna International Centre (VIC) and to participate in a careers workshop with the UNIS Director Martin Nesirky who gave the students information about different career opportunities within the United Nations.

"Overall, the day was beyond what I had expected. I applied for this programme primarily to have a look behind the curtains of an organization that I have been interested in for many years," one of the students said about his motivation for joining the programme, "The Shadowing Day seemed like a good opportunity to get to know the UN a little bit better. But it was much more than that." Another student described the day as a positive experience: "I had an excellent shadowing day. The person that I shadowed was open and kind, willing to answer all our questions, engage in discussions, and involve us in his daily activities."