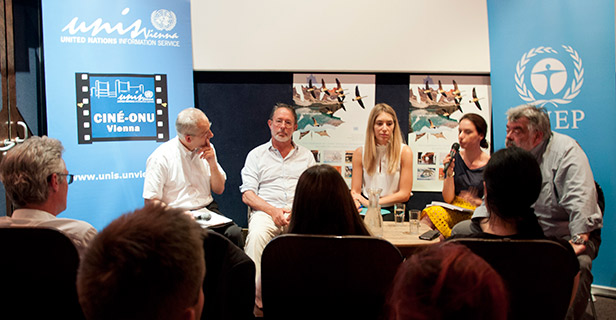 VIENNA, 12 June 2017 - "Rising sea levels threaten entire countries. Oceans are warming and becoming more acidic, causing coral bleaching and reducing biodiversity. Changing currents will have a serious impact on weather patterns; we must prepare for more frequent storms and droughts. Fisheries in some places are collapsing. Dead zones - underwater deserts where life cannot survive because of a lack of oxygen- are growing rapidly in extent and number.  Many species could be extinct within decades," UN Secretary-General António Guterres told the opening of the Ocean Conference in New York.

In "Racing Extinction" Oscar-winning director Louie Psihoyos assembles a team of artists and activists on an undercover operation to expose the hidden world of endangered species and the race to protect them against mass extinction. Spanning the globe to infiltrate the world's most dangerous black markets and using high tech tactics to document the link between carbon emissions and species extinction, the documentary reveals stunning, never-before seen images that truly change the way we see the world.

The film was followed by a captivating panel discussion moderated by the Director of the United Nations Information Service (UNIS) Vienna, Martin Nesirky.

The speakers all emphasized the importance of combatting wildlife crime and agreed on the fate that awaits us if we do not act, which would be mass extinction of many species, hugely decreasing biodiversity.