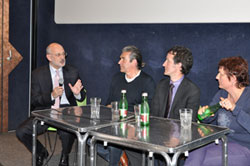 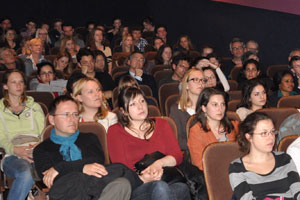 "Sold out!" said the girl behind the ticket counter of "Topkino" just before the film was about to begin. UNIS Vienna successfully started a new film series that will regularly show films on UN related topics in the city.

In cooperation with the Viennese arthouse cinema Topkino the series called "Ciné-ONU Vienna" on 23 April screened a preview of the film "Little Dancer", which will have its world premiere at the Newport Beach Film Festival in Los Angeles later this month, for its opening session. The screening was followed by a panel discussion on human trafficking, the underlying topic of the film. The panel, moderated by UNIS director Janos Tisovszky, featured film director George Jecel, Martin Fowke from the Human Trafficking and Migrant Smuggling Section of UNODC and Evelyn Probst of the Austrian Intervention Centre for Trafficked Women LEFÖ and sparked a lively discussion with the audience.

"Ciné-ONU Vienna" is part of a Europe-wide initiative -- originally started three years ago by UNRIC Brussels -- of regular film screenings of UN related topics followed by podium discussions with invited guests who were part of the film making process or are experts in the topic covered by the film. The United Nations Information Service (UNIS) Vienna is honoured to have "Ciné-ONU Vienna" partner with this human world (THW) film festival and Topkino for the regular film screenings in Vienna.

The next screening will be on 14 May 2012 with the documentary "The Light Bulb Conspiracy" on planned obsolescence to mark the International Year of Sustainable Energy for all.