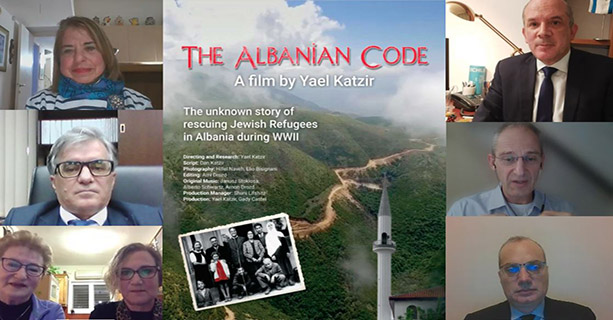 Every year, on 27 January, we gather to mourn and remember those who died in the Holocaust and honour the survivors. To mark this year’s International Day of Commemoration in Memory of the Victims of the Holocaust, Ciné ONU Vienna, Brussels and Geneva organized a Europe-wide online screening of the film ‘The Albanian Code’ by Yael Katzir , in cooperation with the Permanent Missions of Israel and Albania to the United Nations (Vienna).

With unique archive footage, the documentary features the little-known story of how thousands of Jewish refugees in Albania were saved in World War Two. In the film, Ennie Altaraz and her daughter Michal Kaplan travel to Albania, where Ennie and her family found shelter escaping from Yugoslavia. Ennie decided to go back to say thank you to all those who saved her and her family. This voyage is full of surprises, discovering how an entire nation saved Jewish refugees, devoted to their Albanian moral code, the Besa, showing humanity even in the darkest times.

The online event, joined by around 270 participants, started with opening remarks by Mr. Mordechai Denis Paul Rodgold, Ambassador of the State of Israel to Austria and Permanent Representative to the UN, OSCE and International Organizations in Vienna and Ambassador Igli Hasani, Permanent Representative of the Republic of Albania to the International Organizations in Vienna.

“The thing that people can do, the humanity they show, inspired me to make this film. Everybody who has to tell a story, should tell it, because we can learn from it so much,” explained Ms. Katzir.

“I think Albanians are like every other nation,” said Mr. Sinani, but for him the difference lies in its cultural and religious history and a desire to protect the persecuted. Solidarity creates a strong bond, which can save lives, something Ms. Altaraz will be forever grateful for, as she emphasized. Despite having a joyful life now, she said, she will always remember the escape from Yugoslavia to Albania. For her, it is an important lesson for future generations that differences, no matter the religion or ethnicity, could be and will be overcome. Ms. Kaplan joined her mother by saying: “I feel as a second generation of survivors it is our responsibility to keep the memory alive. We never forget.”

Mr. Nesirky closed the panel discussion with a quote from UN Secretary-General António Guterres’ Holocaust Remembrance Day message: “This year must be a year of healing. Healing from the pandemic and healing our broken societies in which hatred has all too easily taken root. As we remember those who died in the Holocaust and honour the survivors, our best tribute is the creation of a world of equality, justice and dignity for all.”

To mark this important day, UNIS Vienna and the Permanent Mission of Israel to the UN (Vienna) also organized a virtual commemorative ceremony on YouTube with messages by UN Secretary-General Guterres, Director-General of the United Nations Office at Vienna (UNOV) Ghada Waly, Israeli Foreign Minister Gabi Ashkenazi and Ambassador Rodgold. You can watch the ceremony here: