Around sixty children in Vienna and Bratislava joined a series of Danube Art Masters workshops on the banks of the River Danube not far from their schools, aimed at creatively encouraging children to care about and protect our rivers and oceans.
The children from the bilingual primary school OVS Schüttaustraße and the primary school Donau-City in Vienna, Austria and the Brilliant Stars International School in Bratislava, Slovakia participated in the events, organized by the Austrian Youth Environmental Platform (JUMP) with the support of the United Nations Information Service (UNIS) Vienna.

The workshops, which took place before and after the UN oceans conference 2022, explored in a creative way the importance of protecting rivers and water ecosystems. To start, the children took part in a short quiz about the river and its wildlife. Questions challenged the pupils such as where does the Danube originate and where does it flow to? How many countries does it flow through on its path? And most importantly, why should we protect it?

After a short introduction to the Danube’s various bird species by Lena Bauer and Sophie Weiss from JUMP, the students worked in small groups to collect natural material and litter from the banks of the Danube to use creating works of art. 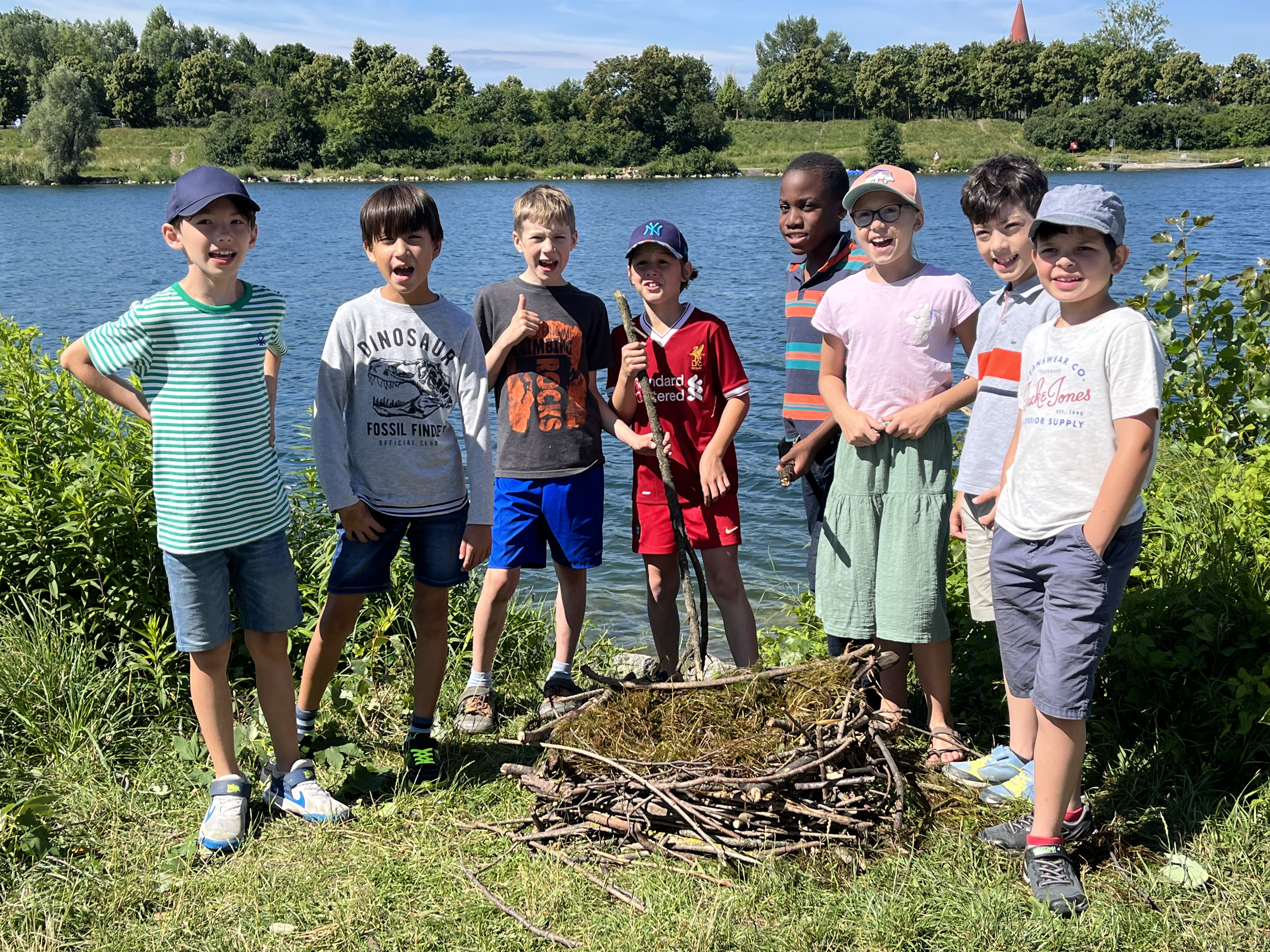 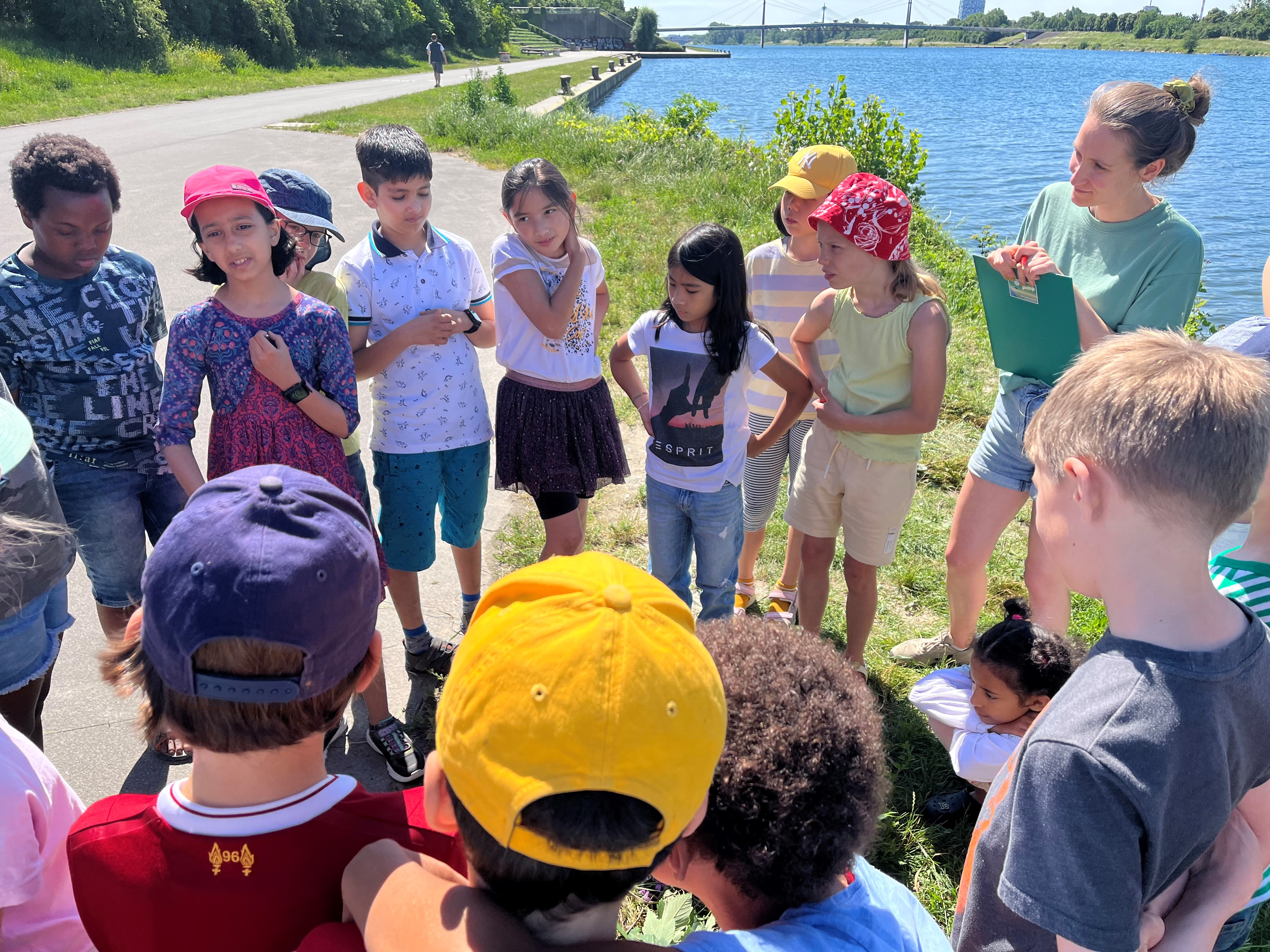 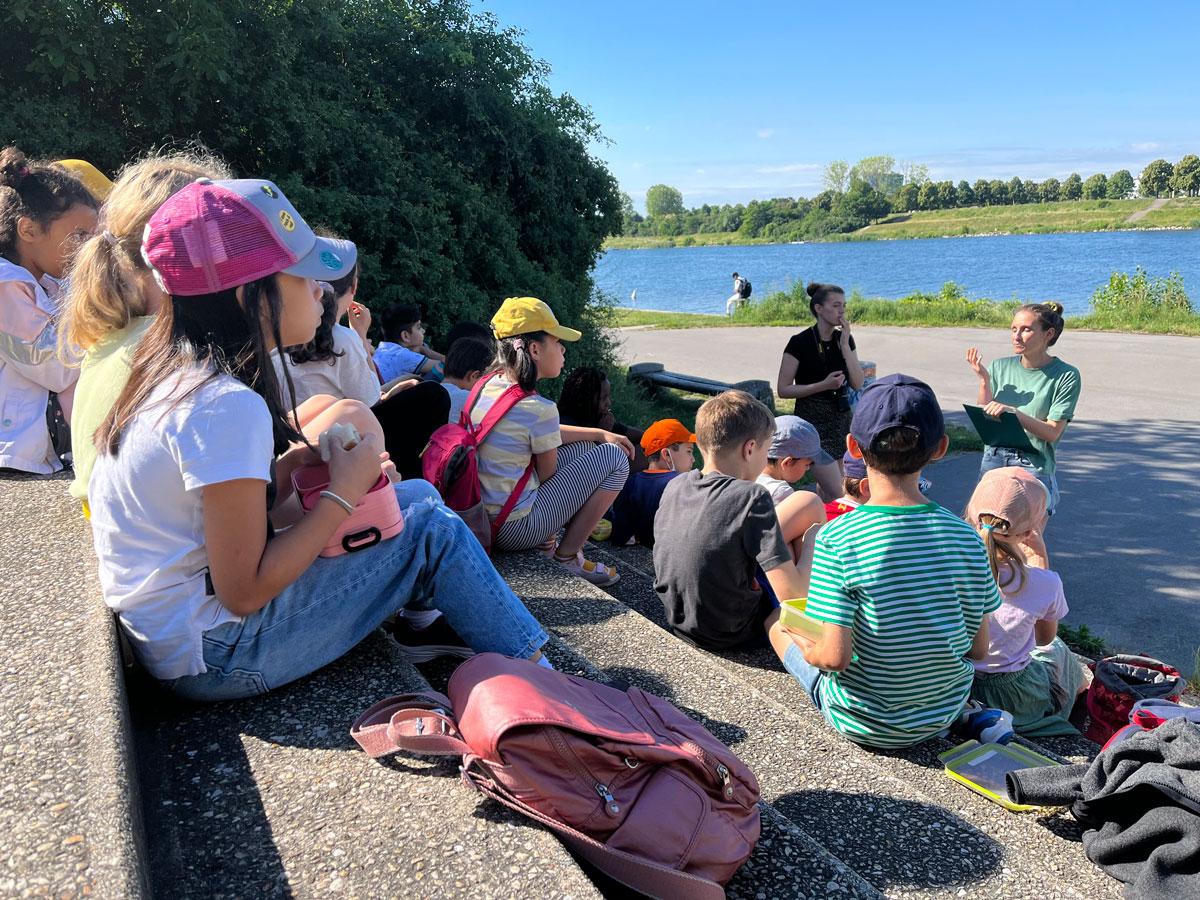 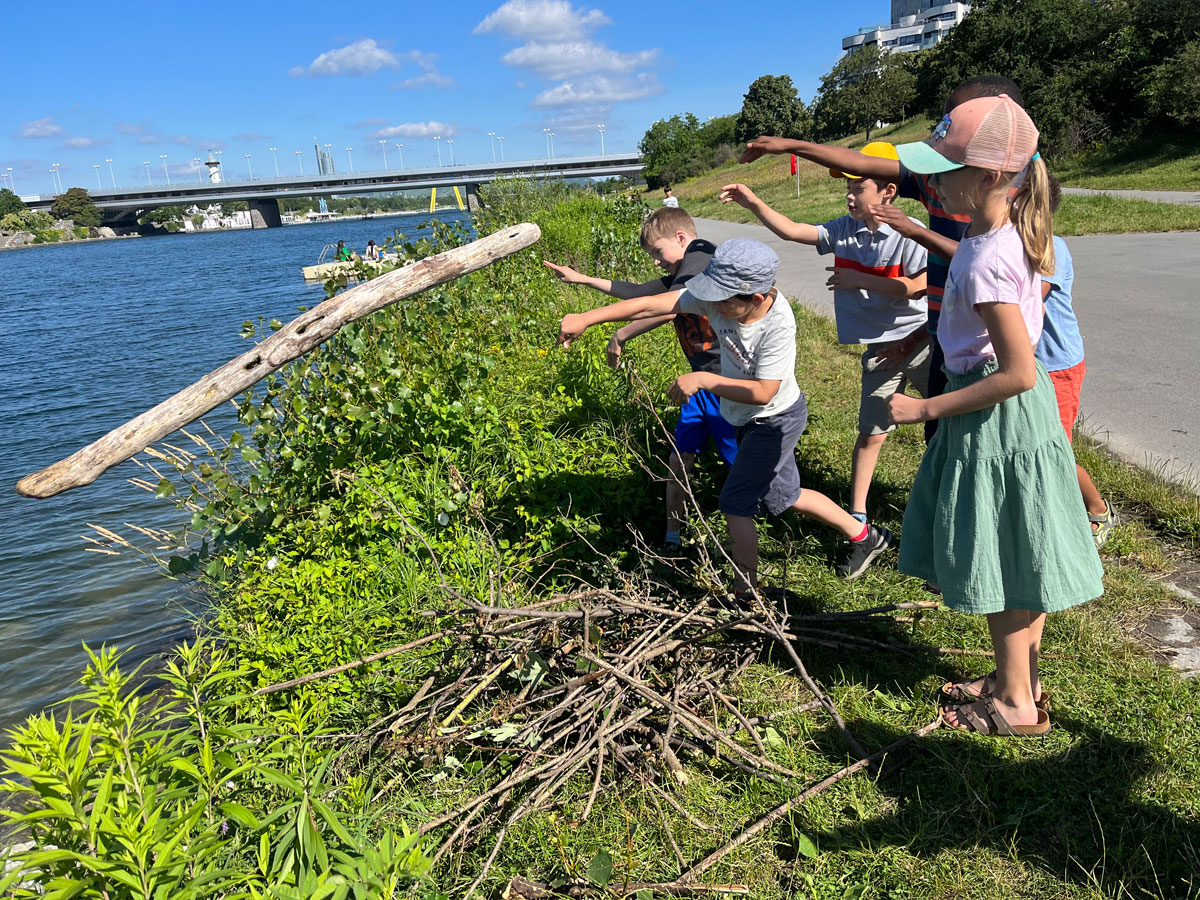 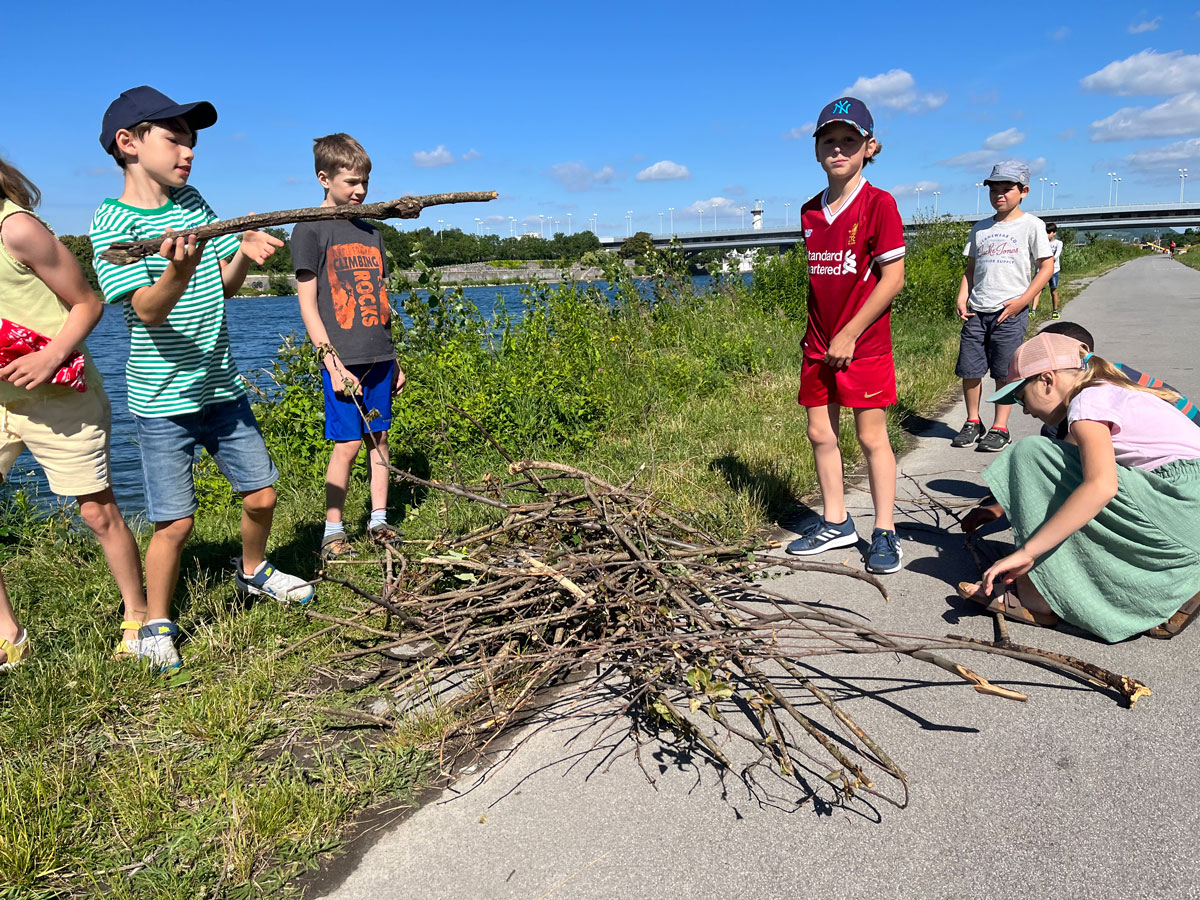 Without any encouragement, it was lovely to see during the first workshop with the bilingual primary school Schüttaustraße on 21 June 2022, that every group started to build nests for the birds, like swans and ducks, that they had learnt about. After the masterpieces were complete, the children presented their works of art to each other and explained the idea behind them and their connection with the Danube.

When asked about the materials they were using to make the nests (grass, flowers, sticks and algae) the children said that they wanted to make them as comfortable as possible for the birds to sleep in.

During the second workshop with the primary school Donau-City on 12 September 2022 one of the children explained, that the heart she built, represents nature, and its name is “Heart of the Ocean”.

The children of the Brilliant Stars International School in Bratislava were armed with creativity, enthusiasm and bravery against the rainy weather during the third workshop on 19 September 2022 and set out to learn more about the river Danube and how “pieces of art” could be made from what can be found on its shores. All artworks have been photographed and will be submitted to the Danube Art Master 2022.

The inspiration for the project, Ms. Bauer said, was to use art as a creative link for the children to learn about nature. Through art they can connect with the Danube ecosystems in a more personal way. Attending schools only a few minutes away from the river, she said, is of great benefit to the children. They get to experience nature up-close, even in the city. Teachers accompanying the group praised the workshop and the opportunity for the children to learn and be creative in nature.

The events were held to raise awareness about local water-based ecosystems around the time of the UN Oceans Conference in June, and also to promote the Danube Art Masters competition. This is open to children and young people between the ages of 6 and 18 from all countries in the Danube region (Austria, Bosnia and Herzegovina, Bulgaria, Croatia, Czechia, Germany, Hungary, Moldova, Montenegro, Romania, Serbia, Slovakia, Slovenia and Ukraine). It encourages the children to take a closer look at the rivers in their neighbourhood and to reflect on what "environment" means to them.

United Nations Secretary-General António Guterres has repeatedly praised and emphasized the efforts of younger generations in tackling climate change. Getting children and young people involved in such educational events is important for the future of conservation and climate protection.