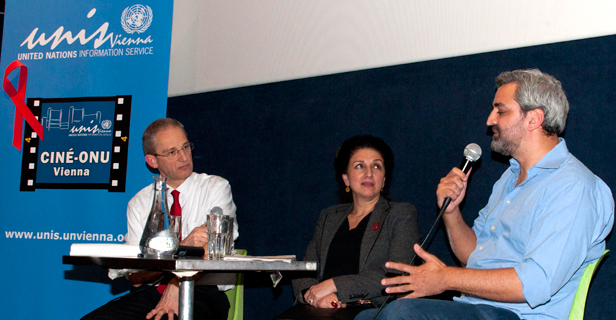 "If it is true that one death is a tragedy and a million deaths a statistic, this is a story about statistics." These are the opening words of the documentary "Fire in the Blood", which tells the story of  how at least 10 million people died unnecessarily in Africa and the Global South since 1996 because they did not have access to low-cost AIDS drugs.

Every year on 1December, World AIDS Day, the entire world commemorates people affected by HIV/AIDS. To raise awareness about victims of one of the most dangerous diseases of the 20 th and 21 st centuries, the United Nations Information Service (UNIS) Vienna, in cooperation with the Permanent Mission of India to the United Nations (Vienna), This Human World Film Festival and the Topkino, screened the documentary "Fire in the Blood" as a part of the Europe-wide Cin é-ONU initiative.

"This film is not only about AIDS. It's all about money and power. It was important for me to tell the story about pharmaceutical companies," said the film's director, Dylan Mohan Gray, who came from Mumbai to join the screening and panel discussion at the Viennese art-house cinema Topkino on 1 December. A historian by education, Gray started to research the HIV/AIDS crisis and the lack of affordable HIV treatment medicine in African countries out of personal interest: "It was not properly documented; this is how many things get lost in history."

When talking to Western activists, Gray found out that people who could help often were not interested in the HIV crisis and access to affordable antiretroviral (ARV) treatment in Africa. The film notes that an overwhelming majority of HIV patients could have been saved if pharmaceutical companies had lowered the prices of ARV medication for poor countries or made exceptions from patent law to allow other countries such as India to produce much cheaper but equally effective generic drugs.

"In many countries, HIV epidemics are driven by individuals who inject drugs. Even if the treatment medicine is available, there are two groups of populations that are the last ones to receive it: people who inject drugs and people in a prison setting," Soltani explained.

As the film and panel discussion made clear, the fight for access to affordable medication for everyone - despite economic interests, lobbying of governments and profit margins - is as important as ever.

Referring to limited access to expensive life-saving medication for another major disease that afflicts many and cuts lives short, Gray said: "Cancer is the new HIV right now."