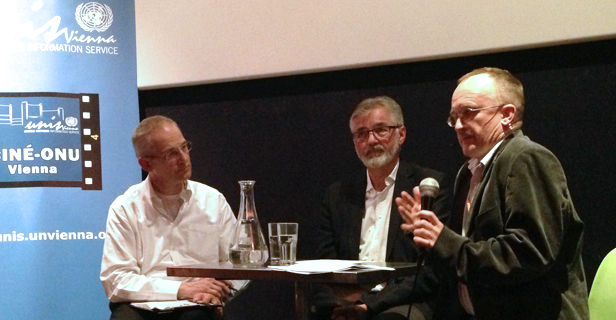 The Future Of Energy?: Ciné-ONU Film Screening of The Lithium Revolution

In a world developing at a rapid pace, more and more energy is required to sustain further growth as well as meet the demands of modern realities. As the basis for a new kind of battery technology, lithium could become the defining natural resource of the 21 st-century, if not a solution to the impending energy crisis as fossil fuel reserves are exhausted.

Every month, the United Nations Information Service (UNIS) in Vienna collaborates with Topkino to host film screenings on different global topics, as part of Ciné-ONU. On Monday, 11 May, the film 'The Lithium Revolution' was shown, followed by a discussion with Professor Reinhard Haas from the Vienna Technical University, who specializes in energy, and Dr. Josef Waltl, a former Shell Executive Vice-President who joined the UN Sustainable Energy for All (SE4ALL) initiative as a senior advisor in 2014.

'The Lithium Revolution' is a 2012 documentary film, written and directed by Andreas Pichler and Julio Weiss. It considers the potential of lithium from several different perspectives, yet also zooms in on specifics to illuminate what the 'revolution' looks like in practice. Lithium batteries are already widely used in electronic devices such as laptops or phones. Lithium car batteries are enabling the development of electrical vehicle networks, also known as e-mobility. Pioneers in the electrical vehicle industry see such vehicles as an alternative to conventional cars and the key to a greener future. China, one of the focuses of the film, is the fastest growing economy in the world. Its interest in lithium centres around electric cars, which could provide a more efficient way to satisfy demands for a modern lifestyle while also keeping CO2 emissions down. Across the globe, the interest for lithium is growing in Bolivia, albeit for different reasons. Fifty per cent of lithium resources are located in Bolivia, giving the country an unique historic opportunity for development. According to a salt miner interviewed in the film, 'lithium is the future of Bolivia. It will bring progress to the region, if people are not selfish, and share.' Concerned about possible exploitation by multinational companies, Bolivia has taken on the challenge of industrialising lithium on its own.

When asked about the feasibility of e-mobility, Professor Haas insisted that worldwide regulations would be important and identified the failure to agree on standardized batteries or plugs as one of the main constraints on effective use of these new technologies.

Dr. Waltl cautioned that while the 'lithium revolution' will certainly have important repercussions for global energy, traditional energy sources will continue to be vitally important, not only because of increasing demand but also because electric cars currently run on electricity generated by fossil fuels. For e-mobility to truly constitute a green alternative, the entire energy chain needs to be built on renewables. Until then, he predicts a mix of energy sources will characterise the energy economy of the future.