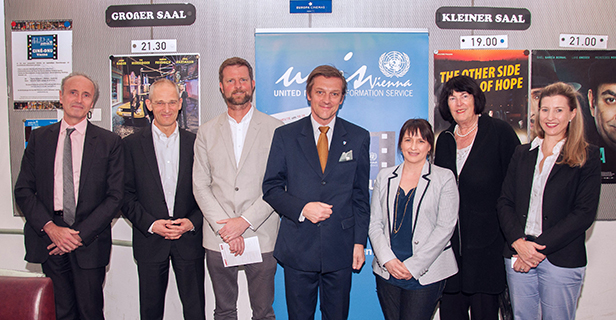 VIENNA, 10 April 2017 - With ongoing conflicts in Syria and Iraq, the destruction of cultural heritage has moved once again into the focus of the media and the public. " The Destruction of Memory", a documentary film by Tim Slade which was screened on 10 April 2017 at Ciné ONU Vienna, looks at how individuals, organizations and courts struggle to protect, salvage and rebuild cultural heritage.

Austrian UNESCO representative Eva Nowotny praised the documentary as a reminder of "the astonishing people who risk their lives to protect and safeguard their culture". Film director Tim Slade and Ms Nowotny agreed that educating local citizens is key to lessening the impact of conflicts on cultural heritage: "War starts in the brain of man. Also peace starts there. It is the changing of this mind-set that will really save us," said Nowotny.

However, the film not only shows the damage done by ISIL (Da'esh), but also looks back at acts of deliberate cultural destruction during World War II and what pushed these crimes into the shadows for so many years. "Oftentimes legislation struggles with the balancing of 'people versus their culture' and the question whether to weigh one against the other. The lesson of the film is hopefully that you have to take both into account," explained Tim Slade.

The screening, attended by around 120 people, was followed by a panel discussion with Tim Slade, Eva Nowotny, Chief Executive of the International Council of Museums (ICOM) Austria Elke Kellner, and Blue Shield Austria board member Markus Swittalek. The discussion was moderated by UNIS Vienna Director Martin Nesirky.

Ms Kellner explained ICOM's role in the preservation of heritage, and how important it is to publicly raise awareness about the destruction and looting of cultural objects. Terror organizations such as ISIL are funded to a large extent through the proceeds of looting and selling cultural artefacts. Blue Shield board member Markus Swittalek explained how military knowledge is highly advantageous when it comes to protecting cultural property in conflict.

The Vienna screening was organized by the United Nations Information Service (UNIS) this human world (THW) Film Festival and Topkino. 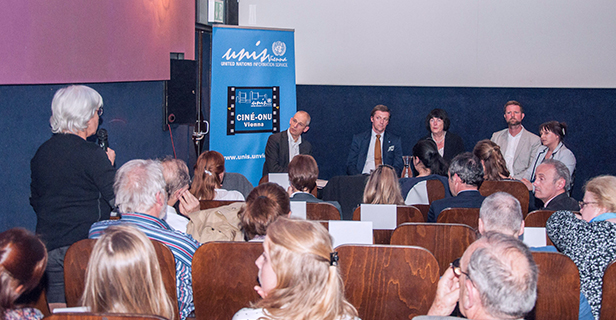