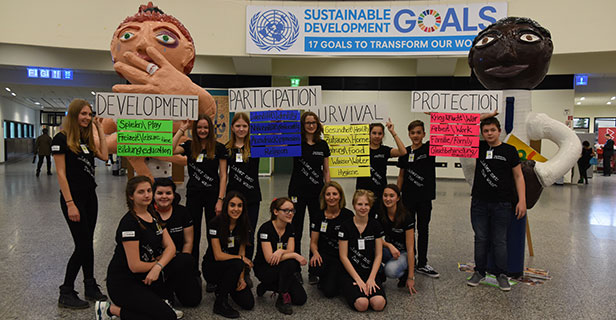 They are enormous, colourful and unmissable: ten vibrantly painted "Giant Children" have been greeting UN staff, conference participants and visitors walking through the Rotunda of the Vienna International Centre (VIC). The "Giant Children representing the UN Convention on the Rights of the Child" exhibition opened on 24 th February with speeches and remarks by its creators, the Youth Ambassadors of Caritas Vorarlberg and the Austrian Permanent Representative to the UN in Vienna, Ambassador Christine Stix-Hackl, as well as speakers from Caritas Austria and the Ludwig Boltzmann Institute (BMI)  for Human Rights. Even before the official opening ceremony, the figures were already highly popular with many staff and visitors taking pictures of the large sculptures and bringing their own children in to show them the exhibition.

The Youth Ambassadors - 15 children from Vorarlberg aged 13 to 19 years - presented their work to raise awareness for children's rights, each figure representing one of the ten fundamental rights of the Convention. It is an impressive way to draw attention to the young people's concerns. The UN Children's Rights Convention, signed by 196 countries, includes the right of children to live in a secure environment without discrimination, the right to access clean water, food, medical care, education and the right to participate in decisions affecting their well-being. Yet, many young people do not receive this protection, often affected by war, hunger or child labour.

Youth Ambassadors is a project of Caritas Vorarlberg, committed to give young people a voice and to raise awareness of children's rights. "Nobody else, but the children and young people themselves, should be empowered to demand and support their rights with their own initiative and personal motivation," writes Nicole Kantner, Project Manager for the Caritas Youth Ambassadors. Under the motto 'Roll up your sleeves and lend a hand' the youngsters undertake various activities from organizing campaigns and performing musicals to holding workshops in schools. It took three years from having the idea to having the finished sculptures. "By their huge size, the giant children cannot be overlooked and are moreover amazing art objects," said one of the young ambassadors. Exhibiting the 2.70 m tall statues at the UN itself was a brilliant opportunity to highlight the non-compliance of many children's rights around the world.

The exhibition itself was opened against the backdrop of the circle of child statues, with words from the Youth Ambassadors: "At home, at school, even in kindergarten, adults tell us what to do and how to behave. Then why do they go out and do the things they tell us not to do? They tell us we are the future. Why do they sometimes forget that we are already here now? Too many children's voices remain unheard. It is time to speak up on behalf of the many children who don't have our opportunities."

Christoph Schweifer (Caritas Austria), Helmut Sax (BMI) as well as Ambassador Christine Stix-Hackl reminded the audience that legal systems should move faster and develop further for children and youth to receive the protection they deserve. They thanked the Youth ambassadors for their work and efforts to remind us of children's concerns and for giving them a voice at the United Nations. The ceremony was completed with a ribbon cutting by all speakers, UNIS representatives and the Youth Ambassadors.

Ahead of the exhibition opening, the Youth Ambassadors had presented their ideas for youth workshops on children's rights to representatives of the Human Rights Office of the City of Vienna, the Fundamental Rights Agency (FRA) of the European Union and the office of the UN High Commissioner for Refugees (UNHCR) in Austria. The City of Vienna also hosted a lunch for the Youth Ambassadors as well as 117 student delegates from Vienna, Lower Austria, Hamburg und Berlin joining a simulation conference called "Modell UNO Vienna" which took place at the same time in the premises of UNIS Vienna. 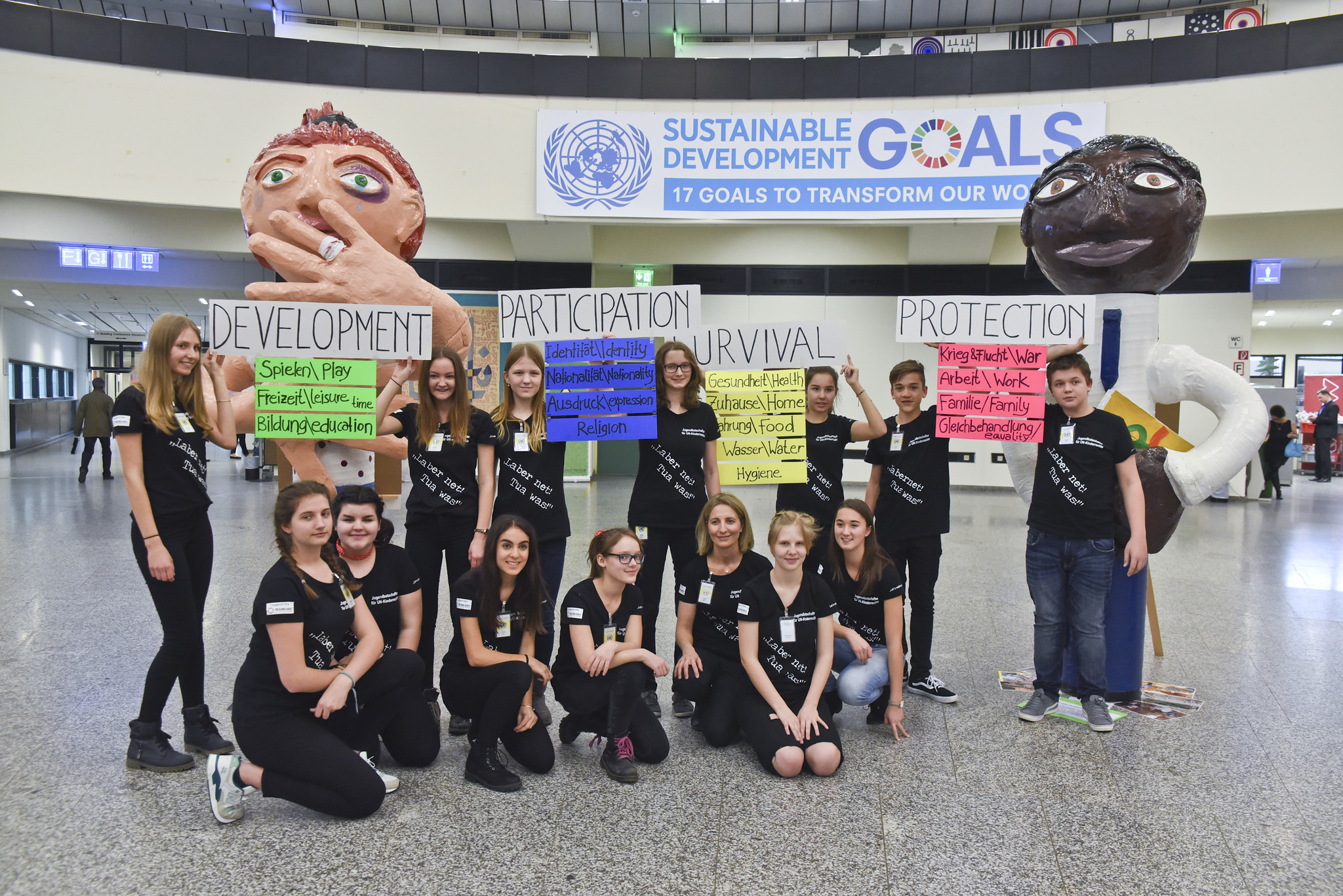