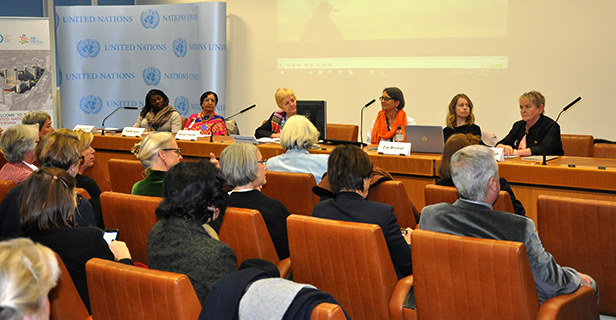 Girls not Brides: "Because I'm special, unique and precious"

VIENNA, 28 November 2017 - Each year 15 million girls are married before the age of 18 - that's 28 girls every minute or one every two seconds. Ending child marriage is one of the targets of Sustainable Development Goal 5 on gender equality.  An event about 'Girls Not Brides' held at the Vienna International Centre attracted a large audience interested in finding out more.

The event was organized by the Vienna NGO Committee on the Status of Women, supported by the United Nations Information Service (UNIS) Vienna, to mark the International Day for the Elimination of Violence against Women and the 16 days of Activism Against Gender-Based Violence Campaign. The 16 days campaign started on 25th November and aims to raise public awareness and mobilize people everywhere to bring about change. It will run until 10th December, which is Human Rights Day.

At the heart of this year's theme "Leave no one behind: End violence against women and girls" is the absolute necessity to support those who are particularly vulnerable.

On behalf of UNIS, Anne Thomas, who is also a Focal Point for Women for UNOVUNODC, welcomed the participants and emphasized that more than one in three women have experienced violence in their lives.  She quoted the words of UN Secretary-General António Guterres at an event in New York to mark the International Day: "Violence against women is fundamentally about power. It will only end when gender equality and the full empowerment of women will become a reality."

Former first lady of Austria Margit Fischer highlighted the importance of the work with women all over the world. She mentioned that in the last 100 years women have achieved a lot but many problems are still unsolved or are not acknowledged as problems.

All speakers outlined similar goals: to improve the health of girls, provide access to education, protect against violence and end child marriage. Child marriage happens across countries, cultures, and religions and is fuelled by gender inequality, poverty, traditions, and insecurity. The most affected regions are South Asia, Sub-Saharan Africa, Middle East and Latin America. Viviane Tassi Bela encouraged everyone to involve boys and men in the discussion because we need their power as well. The panellists mentioned that ending child marriages would help to achieve several of the Sustainable Development Goals such as 1: No Poverty, 2: No Hunger, 3: Good Health and Well-being, 4: Quality Education, 5: Gender Equality, 8: Decent Work and Economic Growth, 10: Reduced Inequalities and 16: Peace, Justice and Strong Institutions.