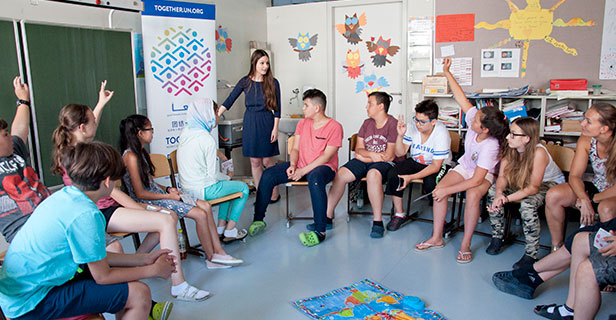 UNIS Vienna brings 'Together' campaign to the classroom

VIENNA, 20 June 2017 - How to promote respect, safety and dignity for refugees and migrants was the topic of a series of 'UN in classroom' sessions delivered by the United Nations Information Service (UNIS) Vienna around World Refugee Day (20 June) as part of the 'Together' campaign.

Within a week, a staff member and interns from UNIS Vienna went to three different schools in Vienna to engage the students with the United Nations and the Together Campaign through different games, discussions and activities. The age of the students ranged from 8 to 15 years, among them refugees and children some with a migration background and some without.

During the one and a half hour sessions, the classes were given an introduction to the UN and on how the UN helps refugees and people in need. The workshop also presented some facts and figures about refugees, which were provided by the UN Refugee Agency, UNHCR, to the students.

In one particular activity, the children showed on a world map what their own life journey looked like, starting with where they were born, where their parents/grandparents came from or where they would like to live one day. This was thought-provoking for the children and the classmates learnt a lot about each other. One highlight of the workshop was a game where students had to come up with as many language versions of the word "Together" as possible. The children were proud to see how many languages they could speak within their class, in one case coming up with more than 20 different languages in a class of 25 students.

In another activity, a short film by the UN Refugee Agency was shown, which portrayed the life story of a young refugee, who had to flee from his home country of Afghanistan to start a new life in Austria. The film showed the challenges and successes the young man experienced in his new home.

At the end, the children discussed what they and others could do to help and support refugees such as providing them with a place to live, or just being more friendly to newcomers, to help refugees and migrants feel more comfortable in their new environment. The students discussed the need to respect each other and work together, no matter what their economic, cultural or social differences are and how talking to each other can help to avoid conflict and misunderstanding. We all have a role towards building a more just world.

The UN in classrooms sessions encouraged an open and informative discussion amongst the children, which was positively received by both teachers and students. Overall the children were eager to participate and learned a great deal. 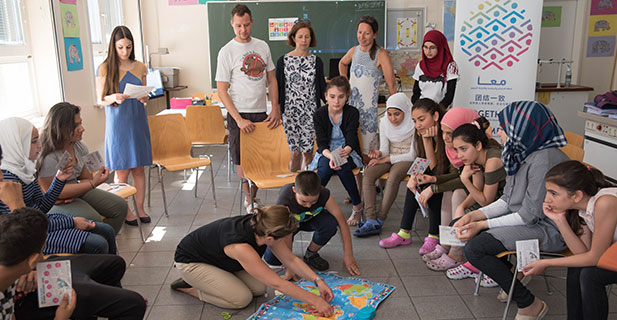