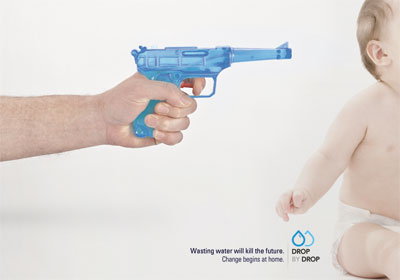 BRUSSELS/COPENHAGEN/VIENNA, 5 June (UN Information Service) - Italian designer Daniele Gaspari has been declared the winner of the UN European Ad Competition on Water; Drop by Drop - the Future We Want.

The competition called on professionals and non-professionals to create a newspaper ad that inspires others to preserve water, now and for future generations. Mr. Gaspari won the competition for his ad "Wasting water will kill the future" which shows a water gun held to the head of an infant. A jury of experts led by France's advertising guru, Mr. Jacques Séguéla chose the ad from more than 3,500 ads submitted to the competition from 45 European countries.

The first prize, the Nordic Council of Ministers Award and a 5,000 euro cash prize, was handed over to Mr. Gaspari at a ceremony in Copenhagen on 5 June, World Environment Day, by His Royal Highness the Crown Prince of Denmark.

The Drop by Drop competition was organized by UNRIC, the United Nations Regional Information Centre in Brussels in cooperation with UNEP, the UN Environment Programme and the Nordic Council of Ministers. It is part of the UN Secretary-General's campaign, The Future We Want in the run-up to Rio+20, the UN Conference on Sustainable Development in Brazil, 20-22 June, where increasing scarcity of water is among the main themes under discussion.

"The combination of loveable and playful objects placed in hostile poses creates an interesting imagery," according to jury member, Swedish photographer Mr. Jens Assur, on the winning ad. "We are drawn in by the contrasts, wanting to learn more."

The 31 year old designer from Verona said he was delighted to have won the competition: "The intention behind this ad is surely to shock people and make them aware that every action they make has consequences,"Mr. Gaspari says. "I hope this message comes across."

A selection of thirty of the top ads entered into the competition from a total of seventeen countries will be displayed on the competition website and published in newspapers which have joined a media partnership with UNRIC.

Already twenty-two exhibitions, many in cooperation with the Nordic Council of Ministers, have been planned in thirteen countries.

In addition to an alliance of European newspapers, the competition has been supported by the Office of the High Commissioner for Human Rights (OHCHR) and other UN Information Centres in Europe.