Summary Report: Symposium for the International Year of Microcredit

On 2 June, UNIS Vienna hosted a symposim on “Promoting Financial Global Partnerships” in honor of the International Year of Microcredit. The symposium was held in cooperation with the Austrian Development Agency (ADA) at the Vienna International Center. The purpose was to discuss the issues facing Microfinance institutions (MFIs) in the developed and developing world. The symposium gave an insight into microcredit as one effective tool out of a variety of instruments for achieving the Millennium Development Goals in the context of the United Nations Secretary-General’s report In Larger Freedom and in preparation of the UN Summit to be held in September. Panellists and participants also discussed the benefits of microcredit and microfinance in different economic and political environments, and elaborated on best practices and innovative approaches. The morning session was chaired by Franz Baumann, Deputy Director-General of the United Nations Office at Vienna (UNOV); the afternoon session was chaired by Christian Strohmann, OiC UNIS Vienna. 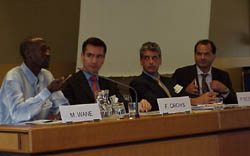 Guided by the theme “Promoting Financial Global Partnerships for Development” delegates of government agencies, activists from non-governmental and civil society organizations, representatives of the financial sector, academia, media, and United Nations staff participated in a lively discussion of the issues facing innovation, development, commercialization, advancement, and cooperation with the goal of including all factions of society in the financial service sector, as regarded by Friedhelm Boschert, Chairman of the Managing Board,  Volksbank International Aktiengesellschaft, as “the democratization of credit” when he talked about a cooperative view of microfinance and stated that “sustainable development is not only for the poor but with the poor.”

Kathryn Imboden, Senior Policy Advisor, United Nations Capital Development Fund (UNCDF), introduced the International Year of Microcredit as it relates to the Millennium Development Goals, while Hermann Spirik, Director of Programmes and Planning of the Development Cooperation at the Austrian Federal Ministry for Foreign Affairs, explained the role of his Government as “niche player” looking for development of new financial products to alleviate poverty. Further talks were given by Hanns Martin Hagen, Vice President and Senior Financial Sector Specialist, KfW Entwicklungsbank, who discussed the role of development banks in supporting microfinance also in crisis and post-conflict areas; and Florian Grohs, Oikocredit International, who analyzed the role of NGOs in promoting global partnerships – lessons learned from South East and Eastern Europe. Mamadou Wane of  North-South Solidarity Net explained how microfinance supports young people in his native Senegal to establish their livelihoods and turns them away from migrating to Europe or to the US.

Following the panelists’ discussion the audience was invited to participate in a question and answer round.

More than 80 participants and six panellists representating non-governmental organizations, government officials, staff members of the Vienna International Center, and the media were present for the symposium. The audience was able to approach the speakers on an individual basis after the discussions.

Participants in the Symposium were then invited to attend one of two seminar sessions. The first seminar was about Mainstreaming Microfinance, and the second concerned Microfinance Investment Funds, reaching to topics such as “Ethical Investment – A Tool for Supporting the Poorest of the Poor”. Participants in the Symposium suggested during the closing session to also liaise with the “Global Marshall Plan” – a European initiative to further the achievement of the Millennium Development Goals; for governments to take on the role as facilitator of knowledge transfer from commercial banks to microfinance institutions; and to better integrate the provision of microloans and other financial tools for the poor in the work of central banks and commercial banks.

The Symposium was held in context of the United Nations General Assembly’s resolution declaring that 2005 be the “International Year of Microcredit”, in order to emphasize the significance of microfinance in the global fight against poverty. Various media ( including Austrian Radio Ö-1, Die Presse, IRNA, Wiener Zeitung, APA) covered the event.