VIENNA,  15 June (UN Information Service) -- One fifth of the world’s population is threatened by the impacts of global desertification. Its effects can be seen all over the world, be it in Asia, the Sahel, Mesoamerica, throughout North America or along the Mediterranean. Today, a third of the earth's surface is threatened by desertification, which adds up to an area of over 4 billion hectares of the planet.

On the eve of the tenth anniversary of the UN Convention to Combat Desertification (UNCCD), the United Nations and its agencies remind the global community that the breadth of drought and soil degradation cannot be ignored. 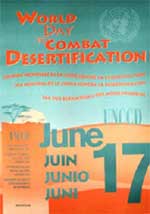 The World Day to Combat Desertification and Drought is commemorated each year on 17 June. It is part of a UN led international campaign to increase awareness of land degradation. This year's celebration carries special significance as 2004 marks the tenth anniversary of the Convention’s implementation. Its theme also highlights the Social Dimensions of Desertification: Migration and Poverty.

Celebrations are set to take place worldwide. In Bonn, Germany, the home of the UNCCD Secretariat, a ceremony marking the anniversary will be held with local authorities and civil society at the City Hall on 17 June.

Desertification is a Silent Killer

Desertification is a land degradation process that happens in all regions of the world. Its causes are brought about by human-induced factors and climate change. Desertification occurs slowly, as different areas of degraded land spread and merge together, rather than through advancing desert. It is comparable to a slowly but clearly progressing “skin disease” over the planet.

Fertile topsoil takes centuries to form, but it can be washed or blown away in a few seasons. Human activities such as over-cultivation, deforestation and poor irrigation practices combined with climate change are turning once fertile soils into barren patches of land.

Arable land per person is shrinking throughout the world, threatening food security, particularly in poor rural areas, and triggering humanitarian and economic crises.

Since 1990, it is estimated that some six million hectares of productive land have been lost every year due to land degradation. This in turn has caused income losses worldwide of US$ 42 billion per year. Yet, the costs associated with inaction in regards to desertification are estimated at one to three percent of developing countries’ GDP. In most cases, investment in combating desertification is one order of magnitude below this amount.

Desertification and drought force people to leave their home in search of a better life. It is estimated that 135 million people - the combined populations of France and Germany - are at risk of being displaced by desertification. The problem appears to be most severe in sub-Saharan Africa, the Sahel and the Horn of Africa. Some 60 million are estimated to eventually move from the desertified areas of sub-Saharan Africa towards Northern Africa and Europe by the year 2020.

By contrast, in the past 20 years, nearly half of the total male population in Mali has migrated at least once to neighbouring African countries (96 percent) or to Europe (2.7 percent). In Burkina Faso, desertification can be identified as the cause for 60 percent of the swelling of main urban centres.

In Peru, farmers on the southern coastal areas face a similar situation. Recurrent droughts and the effects of El Nino has forced one out of five to move from rural areas into the main towns. In Mexico, 47 percent of its land is affected by desertification causing vast population movements. Out of a total population of 91 million, an estimated 8 to10 million Mexicans every year have migrated to the United States in search of a more prosperous life.

Poverty and desertification are closely linked. Two-thirds of the world’s hungry people live in rural areas of developing countries. As highlighted in the 2003 Human Development Report, about half live in farm households on marginal lands where environmental degradation threatens agricultural production.

Forced to take as much as they can from the land for food, energy, housing and income, the poor are both the causes and the victims of desertification. In reverse, desertification is both a cause and a consequence of poverty. With no arable land to grow crops or raise livestock, many have no choice but to leave and resettle in a more fertile area.

Without access to sustainable land use practices, institutional services, credit and technology, most poor farmers are obliged to cultivate degraded land that is unable to meet their needs. This constant pressure on the land causes a decline in food production that further aggravates poverty.

Eradicating rural poverty is one of the first steps in fighting desertification. No long-term strategy of poverty eradication can succeed in the face of the environmental forces that promote persistent erosion of the soil poor people depend on. No programme for protecting the environment can succeed without alleviating the day-to-day reality of poverty.

The Sahelian drought and famine of 1968 to 1974 is a horrific reminder of drought’s impact. In the span of six years, hundreds of thousands of people died and millions of animals perished. Images of starving children, dead livestock and desolate land quickly grabbed the world’s attention and catapulted desertification centre stage.

Under current projections of climate change, the hardship and human loss caused by drought could increase if its contributing factors are left un-addressed.