Interviews with VIMUN Participants from Austria, Hungary and Romania 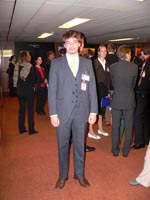 Hartwig Handsur is an Austrian legal student who is interested in international affairs: "The topic we are dealing with here is on weapons and drug trafficking and I thought it would be very useful to have some information on how the UN approaches these problems." He will be representing Burundi in the Crime Commission meeting, a country he knew little about before deciding to come to VIMUN: "If you represent a country that you don't actually know much about, you have to read material and put information together. You get a good idea about a place in the world that you had no clue about before." 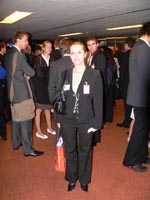 Emanuela Ruse from Romania is a student of international politics and economics and has ambitions to become a diplomat herself: "I think it is extremely important for us to practice because we all want to become diplomats. Of course being in a simulation of the United Nations, we are not so limited as in the real case but it's gaining experience for the future when we will be able to really represent our countries in the Security Council or some other UN bodies." She will be taking part in the Security Council debate on the Middle East crisis representing the United Kingdom. 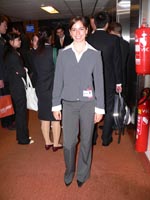 For Eszter Patay from Hungary, who will be representing Qatar in the Security Council debate on the Middle East crisis, this is not her first VIMUN: "I had the opportunity to come to VIMUN last year. I really wanted to try it out especially as they had a topic that really interested me and this year I came back because it was such a great experience."