The new United Nations Convention on Contracts for the International Carriage of Goods Wholly or Partly by Sea, the Rotterdam Rules, describes the rights and obligations of all parties with an interest in the carriage of goods by sea. The Rotterdam Rules bring more clarity regarding who is responsible and liable for what, when, where and to what extent. The application of the new convention will make international trade easier and lead to a reduction in costs.

Why are the Rotterdam Rules interesting for the average person?

Other dry cargos (including consumer goods): 3.3 billion tons (42 per cent) 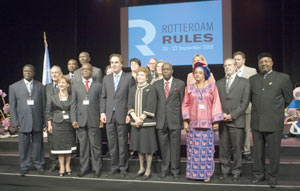