Press Briefing on the Seminar on Assistance to the Palestinian People 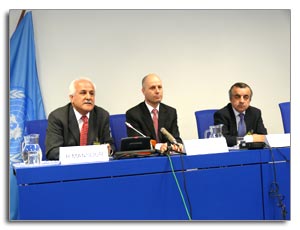 VIENNA, 25 March (UN Information Service) - On the second day of the United Nations Seminar on Assistance to the Palestinian People organized by the Committee on the Exercise of the Inalienable Rights of the Palestinian People on 24-25 March 2010 at the United Nations Office at Vienna, UNIS Vienna organized a press briefing with the Head of the Delegation of the Committee, Ambassador Zahir Tanin (Afghanistan) and the Permanent Observer of Palestine to the United Nations in New York, Ambassador Riyad Mansour. The briefing was moderated by the UNIS Vienna Director, Maher Nasser.

The Head of the Delegation of the Committee, Ambassador Zahir Tanin, told the briefing that the goal of the Seminar was to raise the profile of the Programme of the Palestinian Authority entitled "Palestine: Ending the occupation, establishing the State" and garner support for it. They were also discussing the current social economic situation in the Occupied Palestinian Territory and ways of mobilizing international aid to alleviate the suffering of Palestinian people.

In response to a question about when the conflict would end Ambassador Mansour said the conflict has already lasted longer than it should have and that the Israeli occupation of Palestine was the longest occupation in contemporary history. He said it was our collective responsibility to end it as soon as possible and the Palestinian Authority had declared that it should end within the span of two years from last August (2009). The plan to end the occupation by building the infrastructure of the State would lead to the birth of the State of Palestine, he said. The plan had been endorsed by the Quartet (US, Russia, EU and UN) in the declaration they adopted in Moscow this month and there seemed to be collective consensus that it should be implemented.

Asked about the best way to get Israel to respond Ambassador Mansour called on the international community to bring Israel into compliance. However he said if Israel was not going to listen to the international community which was demanding ending the occupation, stopping settlements because they were illegal, withdrawing from the occupied territory, allowing the Palestinian State to be born, stopping doing what they were doing in Jerusalem, lifting the blockade in Gaza, and allowing reconstruction in Gaza to begin, then other practical measures would need to be taken. Ambassador Mansour said that Israel should not be allowed to be above international law. We would like to see Israel complying, he said but if they don't then it would be the responsibility of all of us to resort to practical measures to force them to come into compliance and there was no other way around it.

In response to a question about whether Israel should be expelled from the United Nations Ambassador Tanin said that the United Nations has always been in support of the Palestinian cause and the plight of the Palestinian people had been the centre of focus of the UN. Ambassador Tanin said that there was a window of opportunity for a different sort of engagement of the UN on the issue of peace in the Middle East.

Ambassador Mansour said that it was true that maybe the UN could resort to practical measures to implement Security Council and General Assembly resolutions which Israel has refused to abide by and he could understand the frustrations of the Palestinian people when resolutions were adopted but Israel did not comply with them.

Ambassador Mansour said that they were telling their friends in Europe that saying the right things by asking Israel to stop building settlements or asking them to lift the blockage of Gaza was not enough. These good words were not sufficient he said because Israel was not listening and maybe they could consider taking actions such as stopping importing goods made in the settlements.

In response to a question about the treatment of women in Palestine and honour killings Ambassador Mansour said one of the speakers in the Seminar [Suhair Azzouni, a Palestinian expert on gender and human rights issues] had raised this issue. Ambassador Mansour said the Palestinian Authority was interested in changing the laws so that the interests of Palestinian women would be defended and total equality between men and women would eventually be reached.