VIENNA, 5 December (UN Information Service) - To mark the International Year of Solidarity with the Palestinian People an iconic image from the newly digitalized archive of the UN Relief and Works Agency for Palestine Refugees (UNRWA) will be projected on one of the towers of the UN building and on the Leopold Museum at MuseumsQuartier in Vienna on Monday 8 December.

By projecting the image on these two landmark buildings in Vienna, the United Nations Office at Vienna, the UN Information Service (UNIS) Vienna, the Austrian Federal Ministry for Europe, Integration and Foreign Affairs and the City of Vienna are joining #BuildingSolidarity, UNRWA's international campaign in which, besides Vienna, the image is being displayed on buildings in seven cities across the world: Bangkok, Beirut, Jakarta, Marrakesh, New York, Seville and Tokyo.

WHERE: UN Vienna: The projection is best viewed from Wagramer Strasse close to the Vienna International Centre (VIC), or from Muhammad Assad square in front of Gate1 of the VIC. It will also be visible from U1 subway trains.

Leopold Museum : The projection is best viewed from courtyard 1 of MuseumsQuartier to the left of the main entrance.

The Relief and Works Agency has digitalized more than 300,000 images from its archive, some of which date back to 1948. The Agency is making these images available online to journalists, writers, scholars and members of the public. 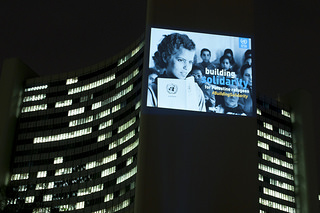