Germany takes over ICPDR Presidency for 2018 from the European Union

VIENNA, 24 January (UN Information Service) - As Germany takes over the annual Presidency of the International Commission for the Protection of the Danube River (ICPDR) today, incoming President Helge Wendenburg has set three main priorities for his term: promote adaptation to climate change in the Danube River Basin, take the next steps in the implementation of the Water Framework Directive (WFD) and the Flood Directive (FD), and further strengthen the integrated approach of ICPDR and the basin-wide exchange of experiences.

As ICPDR President, Mr. Wendenburg plans to finalize the updated the ICPDR Adaptation Strategy by the end of the year. The ICPDR Adaptation Strategy is based on a comprehensive meta-study and aims to provide the foundations for a common, Danube-wide understanding of future impacts of climate change on water resources and suitable adaptation measures. The strategy will also look at possible adaptation measures for water management, ecosystem-based measures and managerial measures such as the promotion of water-saving behaviour, technological measures such as the development of more efficient irrigation systems in agriculture, and different policy approaches in the Danube River Basin and its sub-basins.

"The historic Paris Agreement under the UN Framework Convention on Climate Change as well as the latest Conference of the Parties, the COP 23 held in Bonn underline the need to take urgent steps towards reducing greenhouse gas emissions and adapting to climate change. The ICPDR has already responded by adopting its own Adaptation Strategy in 2012. My Presidency will work towards updating and finalizing this strategy and ensuring that all means are used to equip the Danube River Basin against the adverse effects of climate change," said Mr. Wendenburg.

Also in attendance at the handover ceremony, Elisabeth Köstinger, Austrian Federal Minister of Sustainability and Tourism emphasized Austria's commitment to the ICPDR: "Vienna and Austria have been hosting the ICPDR for over two decades now. We are proud of this commitment to an organization, which further embodies European unity. We appreciate the high priority of the upcoming Presidency to mitigate the adverse effects of climate change. We thank European Union President Gammeltoft and wish Mr. Wendenburg a successful mandate." says Köstinger.

For Mr. Wendenburg, the third priority of his 2018 mandate is to strengthen the integrated approach of the ICPDR and the basin-wide exchange of experiences. The ICPDR has a long tradition in trying to integrate water management issues into other policy areas. The "Joint Statement on Navigation and Environment", the "Guiding Principles on Sustainable Hydropower" and the "Strategy on Adaptation to Climate Change" are successful examples of this integrated approach.

The ongoing work on a "Guidance Document on sustainable agriculture and land management", the Sediment project and the proposal for a Floodplains project as well as the preparatory work for a "Danube Hydrological System" and a "Water Balance for the Danube River Basin" clearly show that the ICPDR intends to take the next steps towards a truly integrated water resources management.

The sturgeon conservation work by the ICPDR and its partners is another important activity that the German Presidency will continue. Germany understands that a concerted effort is necessary to ensure a future for this flagship species. With the "ICPDR Sturgeon Strategy", which is tabled for adoption at this Ordinary Meeting, there will be a comprehensive overview document on sturgeon activities and the role of the ICPDR.

In addition, he aims to continue and - where possible - strengthen the exchange of experiences between the countries of the Danube Basin. There will be a series of workshops, organized by Expert and Task Groups on specific issues which have been identified as a problem for several of countries in the Basin related to the implementation of the Water Framework Directive and the Floods Directive. Workshops and bilateral capacity-building activities are not only another example of the spirit of solidarity which characterizes the ICPDR as the "Danube Family" they also allow for a technical exchange and knowledge transfer which are of particular value in a basin with European Union (EU)- and Non-EU Member States.

As Director General for Water Management and Resource Conservation at the German Federal Ministry for Environment, Nature Conservation, Building and Nuclear Safety in Bonn, Mr. Wendenburg has a good knowledge of the work of river commissions and is a specialist of water and waste legislation. From 2014 to 2017 he was President of the International Commission for the Protection of the Elbe River.

He praised the ICPDR as a widely and internationally recognized role model, showcasing the benefits of good transboundary cooperation in water resources management, in the most international river basin in the world. Mr. Wendenburg expressed his appreciation for the outgoing ICPDR Presidency and his predecessor Peter Gammeltoft for his excellent Presidency in 2017. 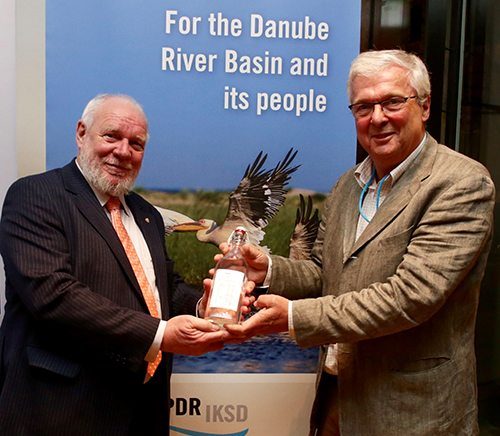