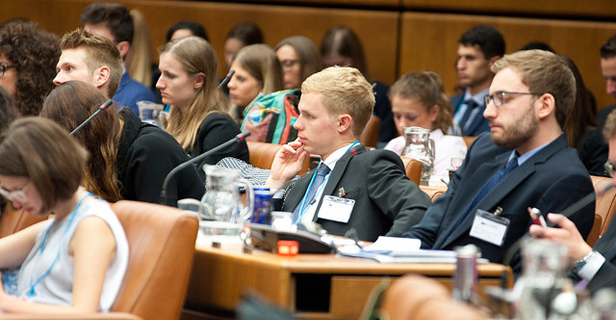 It was planned as a one-time event back in 1995, eventually becoming a tradition with VIMUN celebrating its 20 th anniversary this year. Also, 2015 marks the 70 th anniversary of the United Nations and 60 years of Austrian membership of the UN. Taking this into consideration, VIMUN 2015 was certainly one of the most memorable and most important ones in its history.

VIMUN 2015 Secretary General Dominik Rastinger emphasized in his opening speech: "Every single person that is present here today is trying to make a contribution, no matter how small and in whatever way possible, to make the world a safer, healthier and better place." He furthermore stated: "It is on us to create a world, not only one that we want to live in, but also a world that we can proudly hand over to our future sons and daughters."

The UN Secretary-General's Envoy on Youth, Ahmad Alhendawi, addressed the participants in a video message, highlighting the role of young people as agents of change and an important partner for the UN. He furthermore pointed to the Model United Nations (MUN) as an excellent exercise for a better understanding of the UN, and emphasized that simulations such as VIMUN can be a life-changing experience and a perfect opportunity to meet people from around the globe.

Following the comprehensive deal on Iran's nuclear programme which was reached in Vienna a few weeks prior to VIMUN, a special simulation on "Challenges in Nuclear Verification: Implementing the Comprehensive Agreement on the Iranian Nuclear Programme"  took place this year at VIMUN.

VIMUN 2015 not only gave a firsthand insight into the remit of the international community,  but it also showed the importance of consensus building. Students and young graduates were able to develop leadership, research, writing, public-speaking and problem-solving skills through the various topics that were on the agenda this year: from freedom of opinion and expression, frozen conflicts and foreign terrorist fighters to austerity versus growth and energy in the 21 st century.

The best delegates were given an award at the closing ceremony of the conference.

BBC: Students simulate the working of the UN in Vienna