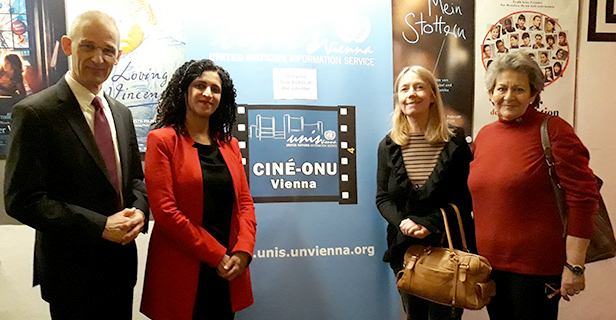 The Poetess: a courageous woman striving for change

"The movie is very interesting, especially when she was talking about the changes. They are happening so quickly," said Reem Aljarbou, a Saudi national and gender advocate, at the Ciné-ONU Vienna screening of "The Poetess" on 5 March to mark International Women's Day 2018.

The movie is about the Saudi poetess, Hissa Hilal, and her participation in the TV show "Million's Poet" filmed in Abu Dhabi, which usually attracts up to 70 million viewers per episode. As the first female finalist in the show, Hissa Hilal seizes the moment to speak up against religious extremism through her poems. In this documentary Hissa Hilal tells about the formative experiences that motivated her to enlist in the competition and to thereby initiate change.

The event was rounded off with an engaging discussion with panellists Lilly Sucharipa, Vice-President of the UN Women National Committee Austria; Reem Aljarbou [LJ1] ; and book author Elga Martinez-Weinberger. The debate, which included questions and comments from the audience, was moderated by UNIS Director Martin Nesirky.

"Hissa impressed me," said Elga Martinez-Weinberger, inspired by the protagonist. Martinez-Weinberger also went on to stress that this film provides a glimpse into the world in which the poetess lives and strives to change. For Martinez-Weinberger the permanently veiled face of Hissa is also a symbol that emphasizes that, in this case, "it is the voice that counts".

Reem Aljarbou was also impressed by the screen adaptation of Hissa's story of participation in a male-dominated poetry competition taking place in a male-dominated society. She emphasized that social media greatly influences the positive developments in women's rights occurring in Saudi Arabia: "Sixty per cent of Saudi society is below 30. If you look at social media, there is no way this can go on like this. They are major push factors towards change."

Lilly Sucharipa also underscored the significance of women's empowerment: "Without women's development - without their empowerment - economic development is not possible. You cannot leave out half of the population. We might have reached equality here with us in certain areas, such as education, but not everywhere."

The film screening was organized by the United Nations Information Service (UNIS) Vienna in cooperation with the Permanent Mission of the Federal Republic of Germany to the United Nations (Vienna), this human world Filmfestival and Topkino.