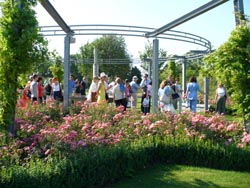 VIENNA, 5 July (UN Information Service) -- On the occasion of the International Year of Deserts and Desertification 2006, UNIS Vienna was part of the opening ceremony of the Garden of Five Continents, in Vienna, Austria. The Garden of Five Continents has a special desert section, aimed at raising awareness of the global problem of desertification that affects one-fifth of the world's population in more than 100 countries. The project showcases plants from different vegetation zones all over the world. 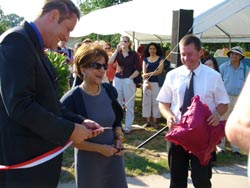 Desertification -- the loss of the land's biological productivity in arid, semi-arid and dry sub-humid areas -- is one of the most serious threats facing humanity. "In a terrible spiral, desertification is partly caused by poverty, and exacerbates it. Together with other problems, it leads to forced migration from impoverished rural areas to cities that are themselves often ill-equipped to adequately shelter and employ new arrivals. If we don't take action, current trends suggest that by 2020 an estimated 60 million people could move from desertified areas of sub-Saharan Africa towards North Africa and Europe, and that worldwide, 135 million people could be placed at risk of being uprooted," said United Nations Secretary-General Kofi Annan in his message on the World Day to Combat Desertification and Drought, observed on 17 June. 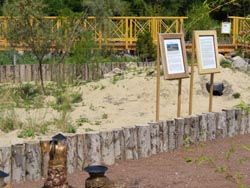 There is also an urgent need to safeguard deserts themselves. Deserts are vital ecosystems. They have also been home to some of the world's most ancient and culturally rich civilizations, stretching over thousands of miles, from the legendary Mesopotamian Fertile Crescent to the regions of the Silk Road and the arid ecosystems of Latin America.

In his opening statement, Norbert Scheed, District Chairperson of Vienna-Donaustadt expressed the hope that the Garden of Five Continents would help raise awareness of the necessity of nature and environment protection, especially with regard to the sensitive ecosystems of deserts. Nasra Hassan, Director UNIS Vienna, expressed her gratitude to the City of Vienna for their efforts to highlight the International Year of Deserts and Desertification, and hoped that the visitors would enjoy this informative and interesting illustration of the problem. The event was organized in cooperation with the City of Vienna. The Garden of Five Continents is a part of an elaborate garden complex that has close to 30 themed gardens. The City of Vienna uses these gardens for young gardeners in training to showcase and hone their talents.

The theme of this year's observance, "The beauty of deserts -- the challenge of desertification", celebrates this unique yet fragile heritage, and draws attention to the need to protect it. This observance also coincides with the International Year of Deserts and Desertification, and with the 10th anniversary of the entry into force of the United Nations Convention to Combat Desertification, which plays an important role in efforts to eradicate poverty and achieve sustainable development and the United Nations' Millennium Development Goals.

The General Assembly declared 2006 the International Year of Deserts and Desertification (IYDD) at its 58th Session. In its effort to raise awareness of the International Year, UNIS Vienna in cooperation with the Austrian Development Agency, has created a flyer in English and German that highlights the situation. This, and futher information on the IYDD is available at