VIENNA, 16 November (UN Information Service) - The Director-General of the United Nations Office at Vienna (UNOV), Yury Fedotov, today welcomed the Mayor of Vienna, Michael Ludwig, to the Vienna International Centre (VIC) for an event to mark the 30 th anniversary of the Vienna Service Office.

In a meeting with the Mayor Ludwig, Mr. Fedotov reiterated the importance of the strong partnership that the United Nations in Vienna has with the host city, Vienna.  He congratulated the City on the 30 th anniversary of the Vienna Service Office and commended the City for its work to achieve the Sustainable Development Goals.

The Mayor said that he was happy to be at the Vienna International Centre for the 30 th anniversary ceremony because it was very important to him that the staff of the Vienna-based UN Organizations feel at home in the city. He also spoke about the contribution that the different parts of the City administration are making to achieve the Sustainable Development Goals.

Speaking at the ceremony Mr. Fedotov said the United Nations Office at Vienna and all the Vienna-based UN Organizations deeply appreciate the City of Vienna's support and look forward to strengthening this partnership in the future.

"Next year, we mark the 40th anniversary of the Vienna International Centre. I am very pleased that the City of Vienna and our host country of Austria are working with us to make sure that this anniversary gets the attention it deserves," said the Director-General. The Mayor said the City would play an active role in the anniversary activities, to help make the work of the United Nations in Vienna better known to its inhabitants: "I would like to bring the VIC closer to the residents of Vienna, just like we brought the City of Vienna into the Vienna International Centre today."

The Children's Choir SUPERAR also sang at the event. Staff working at the Vienna International Centre were invited to look at the information stands from the various services and departments of the City of Vienna.

The Mayor also met the heads of other Vienna-based organizations and staff who came to the celebratory event. 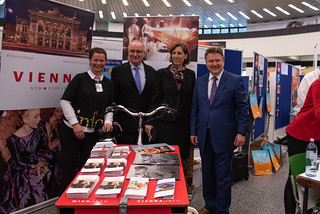