SHARM EL-SHEIKH, 12 December (UN Information Service) The United Nations conference taking place in Sharm El-Sheikh is an important global milestone for improving international cooperation against corruption and helping the world recover with integrity from the pandemic. The ninth session of the Conference of the States Parties (COSP) to the United Nations Convention against Corruption from 13 to 17 December 2021 will also support efforts to restore public trust, strengthen effective institutions, promote sustainable development, recover with integrity from the COVID-19 pandemic and ensure economic and political stability.

This is only the second COSP taking place in Africa. Around 2,700 participants from governments, regional and intergovernmental organizations, civil society, academia, and the private sector are expected to participate in Egypt or online.

This year, 2021, has been a landmark year for global anti-corruption action. In June, the world came together at the first United Nations General Assembly special session against corruption (UNGASS), adopting a strong political declaration to step up anti-corruption action and accelerate implementation of the UN Convention against Corruption – the only legally-binding universal instrument against this crime.

Every two years, the States parties to the Convention meet to review the implementation of the Convention and to discuss how States can better tackle corruption. Among the topics to be discussed at the ninth session are prevention, asset recovery and international cooperation, as well as topical issues like beneficial ownership and how to take forward the commitments in the political declaration of the special session of the General Assembly against corruption.

The United Nations Convention against Corruption

The Convention came into force in December 2005 and has reached almost universal adherence, having been ratified by almost all United Nations Member States, with 189 States parties. The newest UN Member States to join are Somalia and Suriname.

Under the Convention, States are legally obliged to prevent and criminalize corruption; to promote international cooperation; to recover and return stolen assets; and to improve technical assistance and information exchange in both the private and public sectors.

The Convention requires States to criminalize a wide range of acts of corruption, including not only classic acts of corruption such as bribery and the embezzlement of public funds, but also trading in influence, abuse of functions, and the concealment and laundering of the proceeds of corruption. Private sector corruption is also covered.

Effective measures to prevent corruption are vital to ensure public trust, the effectiveness of institutions and sustainable development. The entire chapter II of the Convention is dedicated to preventing corruption with measures directed at both the public and private sectors, ranging from the establishment of anti-corruption bodies to enhanced transparency in the financing of election campaigns and political parties. States should promote efficient and transparent recruitment based on merit, as well as codes of conduct for public officials together with requirements for their financial and conflict of interest disclosures, and the establishment of appropriate disciplinary measures for public officials who do not adhere to these measures. Preventing corruption also requires the involvement of society as a whole including non-governmental and community-based organizations.

States are bound by the Convention to afford one another the widest range of mutual legal assistance in investigations, prosecutions and judicial proceedings. States have agreed to cooperate with one another in a variety of criminal matters related to corruption and are required to undertake measures which will support the tracing, freezing, seizure and confiscation of the proceeds of corruption.

While corruption is a global phenomenon, asset recovery is particularly important for many developing countries where national wealth has been decimated by corruption and where resources are badly needed to finance sustainable development. Effective asset recovery supports efforts to redress the worst effects of corruption while also sending a message to corrupt officials that there will be no place to hide their illicit assets.

How the Convention works

Through the Convention’s Implementation Review Mechanism, States parties have agreed to participate in a process which assesses how they are living up to their obligations under the Convention. This peer review process aims to identify good practices and challenges in national anti-corruption laws, processes and institutional frameworks.

The first review cycle which started in 2010, covered the chapters of the Convention on criminalization and law enforcement, and on international cooperation. The second cycle of reviews started in 2015 and covers the chapters on preventive measures and asset recovery.

Following observations made during the review process, many States have taken various measures to strengthen their anti-corruption framework. Such steps include the creation of new legislation, new and independent anti-corruption authorities, active engagement of the private sector, an open dialogue with civil society or improving their asset recovery frameworks.

States parties have reiterated their support for the review mechanism and reaffirmed the positive role it plays promoting the implementation of the Convention. One element of its success is the willingness of States to share their experiences and learn from each other.

The COVID-19 pandemic has had a negative impact on the pace of the reviews, in particular the country visits. Further delays are expected because of the accession of additional States parties to the Convention which have yet to be reviewed under both cycles of the review mechanism. While the period to complete the second cycle has been extended until 2024, significant efforts will need to be undertaken to complete the cycle within the extended time frame.

The United Nations Office on Drugs and Crime (UNODC) provides technical assistance and training to support States in implementing the Convention. Through its Global Programme against Corruption and its extensive field presence, UNODC is supporting 116 countries

UNODC serves as the secretariat of a new powerful global tool in the fight against corruption, the GlobE Network. This was conceived during Saudi Arabia’s Presidency of the G20 and the first G20 Anti-Corruption Ministerial Meeting in 2020 and launched at the UNGASS in June. The network aims to improve direct cooperation between countries’ law enforcement authorities, in line with a key provision of the UN Convention against Corruption.

Together with the World Bank, UNODC established the joint Stolen Assets Recovery (StAR) Initiative which has been providing assistance to States since 2007 to support the recovery of stolen assets and international efforts to end safe havens for corrupt funds and illicit financial flows. In 2021 until September, 17 countries received assistance and more than 900 people were trained by the StAR Initiative.

Further information for the media 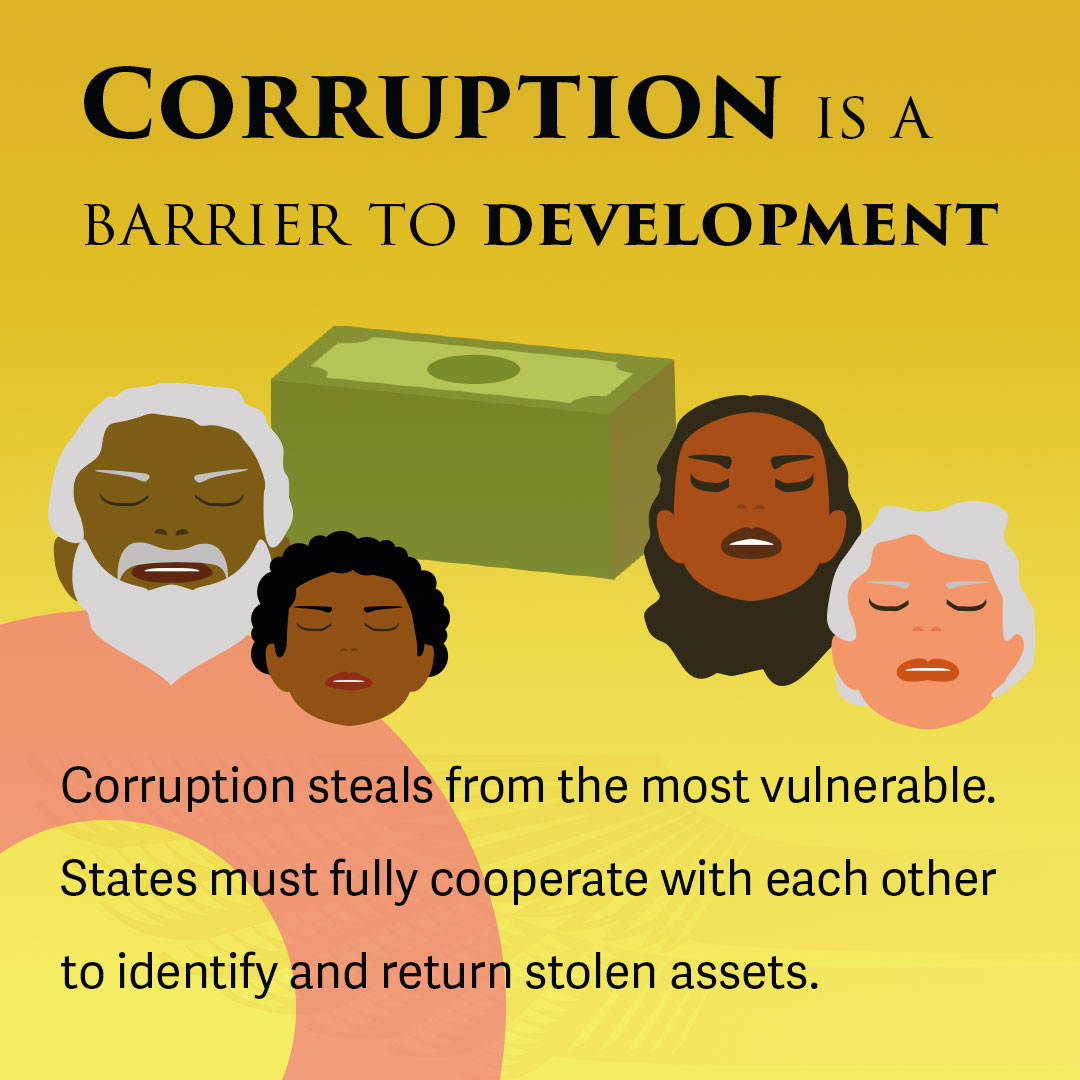