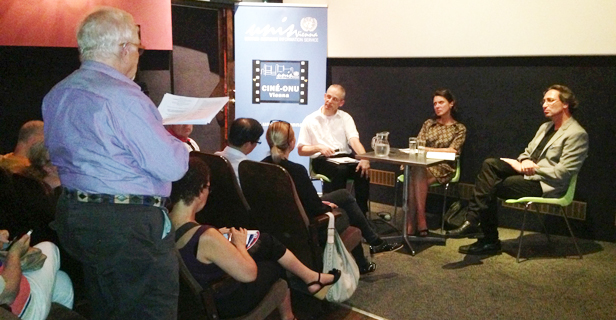 "Oceans are an essential component of the Earth's ecosystem, and healthy oceans are critical to sustaining a healthy planet," the Secretary-General affirmed in his  message for World Oceans Day.  This year's theme  Healthy oceans, healthy planet  emphasizes the exploitation of the oceans from human activities such as illegal, unreported and unregulated fishing as well as unsustainable marine pollution, habitat destruction and climate change. Scientists agree that generally 25 to 50 per cent of the world's species will become extinct by the end of the century, unless the trend is reversed. Otherwise, the beauty in the seas that took billions of years of evolution may just disappear.

(R)Evolution is a follow up to the hit Sharkwater, where film-maker Rob Stewart takes us on an evolutionary adventure and shows how evolution has developed over the past 3.5 billion years. Additionally, he reveals how a revolution for saving biodiversity will be developing in the near future. Filmed over four years and in fifteen countries,  "(R)Evolution" captures some of the most remarkable wildlife spectacles ever recorded, and gives audiences a first-hand look into the biggest battle ever fought.

The film screening was followed by a discussion panel with Gabriele Obermayr, Senior Advisor at the Austrian Federal Ministry of Agriculture, Forestry, Environment and Water Management, Johannes Refisch, Project Manager for the Great Apes Survival Partnership (GRASP) / United Nations Environment Programme (UNEP), and was moderated by Martin Nesirky, Director of UNIS Vienna. Gabrielle Obermayr stressed that Austria ranks among the highest in the European Union when it comes to eco-friendly production and it has 27 per cent protected nature including six national parks. However she also said that there is still much more to be done.

(R)Evolution has already won 10 awards at top film festivals around the world. More information about the film can be found here: http://therevolutionmovie.com