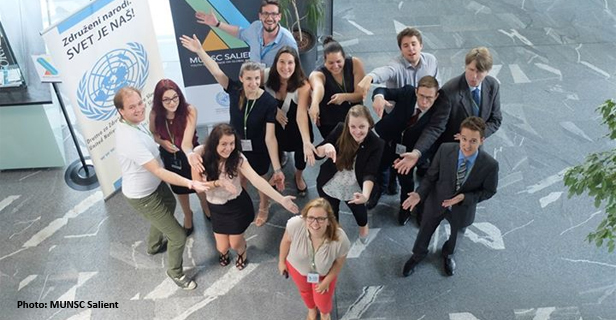 The international youth conference MUNSC Salient, organized by the United Nations Association Slovenia, which took place in Ljubljana in July, witnessed lively discussions around the question of how to address the global refugee crisis.

MUNSC Salient was held between 13 and 17 July 2015 at the Faculty of Social Sciences in cooperation with Academic Forum for Foreign Affairs Graz and Brussels Model European Union. The youth conference, which supplements the traditional Model United Nations (MUN) experience with educational content in the form of interactive lectures, roundtables, workshops and group exercises, was attended by 70 participants from Austria, Belgium, Bosnia and Herzegovina, Cameroon, Croatia, Czech Republic, Germany, Italy, the former Yugoslav Republic of Macedonia, Montenegro, Serbia and Slovenia. The main theme of the conference was the global refugee crisis and all three committees witnessed animated and lively discussions. The UN Security Council discussed the refugee crisis and sectarian violence in Lebanon, the UN General Assembly Third Committee (Social and Humanitarian Committee - SOCHUM) debated how to best protect refugees and internally displaced people in Syria, and the European Council tackled the question of how to revitalize European solidarity in the light of an increased influx of refugees into the EU.

The conference was opened by the honorary patron, Dr. Milan Brglez, president of the Slovenian National Assembly, who pointed out that with the Millennium Development Goals expiring and to be succeeded by new sustainable development goals, 2015 will be the "make or break" milestone for the international community. The keynote speech was delivered by Ms. Caroline van Buren, Deputy Regional Representative from UNHCR for Central Europe. After the opening ceremony, a roundtable discussion with a group of ambassadors based in Slovenia was held on the topic of the post-2015 development agenda and migration. Participants agreed that the Sustainable Development Goals will advance the progress achieved with the Millennium Development Goals. They also debated the increased influx of refugees into Europe and the role of the EU in safeguarding refugee rights.

The debate continued the second day with a roundtable discussion entitled "Fortress Europe - An EU approach to the complex global refugee crisis?" attended by Ms Tanja Fajon, Member of the European Parliament, Mr Emil Ferjančič, Head of the Department for Global Challenges at the Ministry of Foreign Affairs, Mr William Ejalu from the UNHCR Regional Representation for Central Europe and Assistant Professor Dr Nikolai Jeffs from the University of Primorska. When discussing the distribution of refugees within Europe, Ms Fajon pointed out that the numbers being negotiated represent human lives. Mr Ejalu said that solving the problem by building a wall in Hungary is political nonsense, while Mr Ferjančič stressed that migration should be addressed together with development and economic cooperation. Panellists agreed that the crucial question is how to change the narrative on refugees in the media.

The third roundtable with representatives of the Slovene Ministry of Interior, Slovenian NGOs (Slovene Philanthropy, and Legal and Information centre) and a cultural mediator from an Italian refugee camp discussed challenges of assuring refugees rights. They agreed that Slovenia should further develop its integration capacities and that positive discrimination is the key to not only formal but actual equality of refugees.

The conference was concluded with a closing ceremony at the Municipality of Ljubljana.