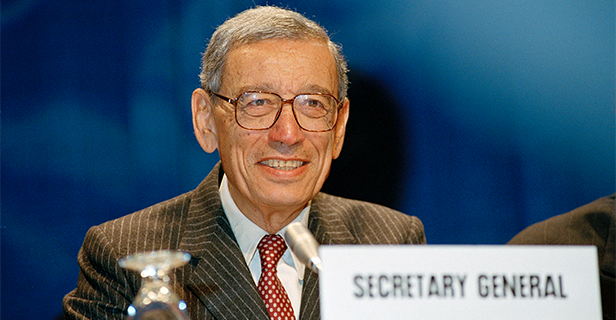 "The late Secretary-General, Boutros Boutros-Ghali, was a respected statesman in the service of his country, Egypt. He was a well-known scholar of international law and brought formidable experience and intellectual power to the task of piloting the United Nations through one of the most tumultuous and challenging periods in its history [...]"

In this article by the late Boutros Boutros-Ghali, the former Secretary-General describes the World Conference on Human Rights held in 1993 in Vienna as one of the two moments that stood out for him in the history of the United Nations.

The article was published in the UN Chronicle special double issue in 2015, celebrating the 70th anniversary of the United Nations. Mr. Boutros-Ghali died on 16 February at the age of 93.

Seventy Years of the United Nations

But perhaps two moments stand out in the proud history of our Organization: the first is the invention of peacekeeping that allowed the United Nations to truly foster world peace through a mechanism we take for granted today, but which is unique in the history of international relations. When I became Secretary-General, the first-ever summit meeting of Heads of State and Government of the Security Council took place, and their mandate to me was clear: develop the next generation of peacekeeping operations. Out of that mandate came An Agenda for Peace. I wish we still heeded the messages of that proposal.

Another great moment for the United Nations was the declaration of human rights, at the start of our Organization's history, and the World Conference on Human Rights held at Vienna in 1993. There have been many conferences setting world agendas and goals before and after Vienna, but for the world to come together to define human rights, and to state clearly a global commitment to their achievement, was an important moment in history.

So what do I wish for the future? My wish is that we build on past achievements and update them for the modern world. Just as the United Nations invented peacekeeping, we now need to modernize the practice, and the Security Council's use of the instruments at its disposal to promote international peace and security. We need a new Agenda for Peace.

We also need to build on the tremendous movement for human rights, and to help ensure that they are universally adopted. It took the same courage to state the universality of these principles in the Declaration and in Vienna, and apply it to the new attacks on the most basic human right: the right to life. Furthermore, we need courage and vision to reach a global consensus in an agreement on defining the scourge of terrorism, and a strong global commitment to fighting this evil.

Boutros Boutros-Ghali is former Secretary-General of the United Nations, having served from January 1992 to December 1996.

See  timeline of his mandate on the UN70 website