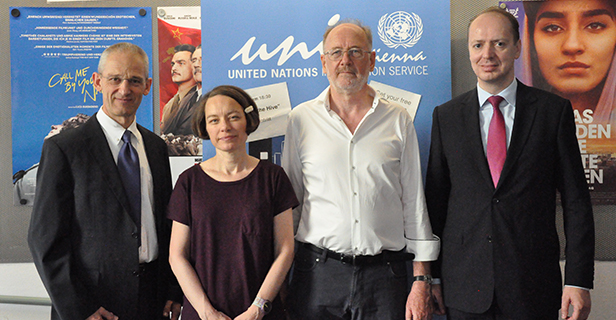 "The images in the film were the most fascinating I have ever seen. It clearly showed the diversity of bees, as well as their need to forage among biodiverse crops to do their work and enrich the habitat," said Rudolf Moosbeckhofer one of the panellists at the Ciné- ONU Vienna screening of "Secrets of the Hives" on 4 June to mark the first ever World Bee Day.

The film is about the dramatic loss of bee populations over the past few decades and around the world. While it remains unclear why this is happening, there is strong evidence that parasitic insects play an essential role in the dying-off of bees. Possible solutions include taming killer bees who have a defence mechanism against mites, or focussing on the many native bees around the world which have hardly been explored.

Before the screening, Slovene Ambassador Andrej Benedejčič told the audience about Slovenia's commitment to the preservation of honey bees and the tradition of beekeeping in his country. It was at the initiative of Slovenia that the UN General Assembly declared 20 May as World Bee Day, back in December 2017.

Rudolf Moosbeckhofer, Head of the Department of Agriculture and Bee Protection at the Austrian Agency for Health and Food Safety (AGES) and Claudia Antonius, Vice-President of the Regional Association for Beekeeping in Vienna, joined the discussion after the film, moderated by UNIS Vienna Director Martin Nesirky.

Moosbeckhofer said he was concerned for the future of the honeybee in connection with human development on earth: "Bees need flowers and the richness of the habitat, and if our agriculture does not leave borders with hedges, shrubs and other areas with flowers, we will have a scarcity of wild bees."

As an advocate for the preservation of bees and a beekeeper herself, Ms. Antonius mentioned that bees can be found on many rooftops in Vienna. The Beekeepers School, run by the Regional Association, aims to reach out to young generations, providing special guided tours for kindergartens and school children: "It's not only about bees, but also about what kind of food you buy, what you eat, how you treat the environment, how you use cars and aeroplanes. I really do hope that people start to make changes in their lifestyle".

In his concluding remarks, Martin Nesirky linked the issue to Sustainable Development Goals as "the goals are looking at human prosperity, but not at the expense of our planet".

The well-attended event was organized by UNIS Vienna in cooperation with the Permanent Mission of Slovenia to the UN (Vienna), This Human World Film Festival and Topkino. 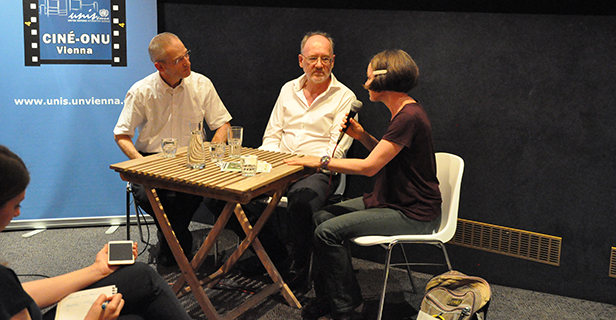