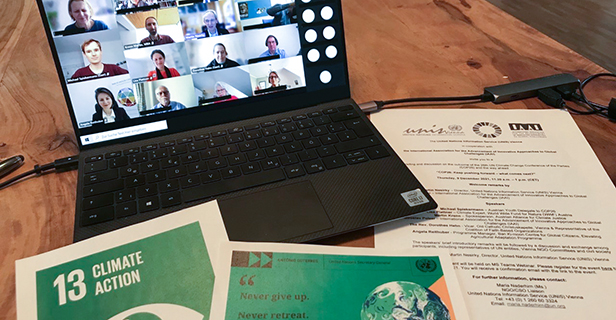 When the UN COP26 global climate summit ended in Glasgow on 13 November, Secretary-General António Guterres was already looking ahead, telling the world to keep pushing forward and never give up. “COP27 starts now,” he said.

Organized by UNIS Vienna and the Austrian NGO “International Association for the Advancement of Innovative Approaches to Global Challenges (IAAI)”, the event focused on sharing experiences from Glasgow, how civil society engagement can contribute to keeping the 1.5-degree goal within the realm of possibility and what can be done beyond COP26. The aim was to identify concrete actions that could help in the run-up to COP27 7-18 November 2022 in Sharm el-Sheikh, Egypt.

There was a panel of six speakers - Michael Spiekermann, Austrian Youth Delegate to COP26; Lisa Plattner, Climate Expert at the World Wide Fund for Nature (WWF) Austria; Martin Krenn, Spokesperson for the Austrian Alliance for Climate Justice; Miroslav Polzer of the International Association for the Advancement of Innovative Approaches to Global Challenges (IAAI) and The Rev. Dorothee Hahn, Vicar, Old Catholic Christuskapelle, Vienna & Representative of the Coalition of Faith-Based Organizations, as well as Angela Reithuber, Programme Manager of the Programme “Elevating Agricultural Adaptation” at the Ban Ki-moon Centre for Global Citizens.

Nesirky and Polzer opened the conference, followed by the speakers’ reflections on COP26 and a lively discussion among participants, who included representatives of Permanent Missions to the UN (Vienna), civil society and experts from UN entities based in Vienna.

Panellists agreed that the outcome of COP26 was rather limited, with some positive points. Nevertheless, they also stressed the need to focus on the work to strengthen climate action.

Spiekermann highlighted that small steps towards a responsive climate action agreement would not be sufficient considering the climate emergency and called for a shift in society to have everyone involved in taking responsibility for climate action. He asked participants to “raise [their] voice in the public” by demanding concrete action.

Plattner called for putting “all hands on deck” by fully operationalizing the Santiago Network, and explained the importance of mobilizing climate finance for the loss and damage caused by the climate emergency. She also stressed the urgent need to support those most vulnerable and affected by climate change.

Krenn pointed out that every country needs to “reach zero emissions as fast as possible” and should produce stronger emission reduction targets. He also stated that “it is on us to support but also to pressure our governments for them to live up to those expectations, and to pave the way for a prosperous world below 1.5 [degrees] of global warming”.

Polzer underlined that civil society representatives should be included in a more substantial manner in the United Nations Framework Convention on Climate Change (UNFCCC) process. He also presented the United Citizens Organization launched at COP26 which aims to advance and promote the role of civil society in climate action through digital innovation.

Reverend Hahn expressed her concern about the urgency of the situation and called on the audience to educate themselves and to start engaging with climate action by changing one’s own behaviour to protect the environment. She also illustrated that food waste is an issue which contributes to climate change that is often overlooked.

Reithuber agreed with the other participants that the outcome of COP26 was “modest” and that the conference did not deliver the results that had been expected. She stressed that “we urgently have to connect the dots between the wisdom of farmers, the knowledge of science, the responsibility of leaders, and the influential power of civil society”.

Nesirky emphasized that achieving the climate goals “can o.nly really be done in partnership”. He furthermore underlined that “civil society is playing a crucial role” in climate action by “offering concrete ideas and proposals that can then feed into the process leading up to each COP and in implementing the Paris Agreement”.