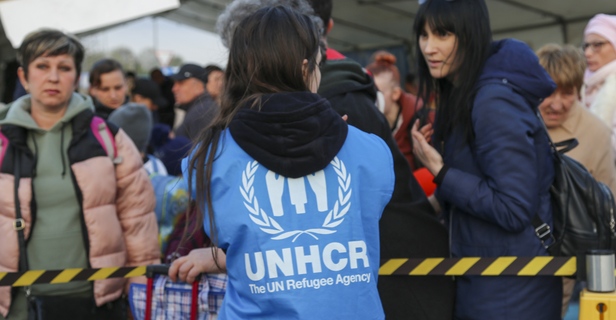 @UNHCR/Caroline Bach, UNHCR staff assist more than 200 refugees from Mykolaiv in southern Ukraine who arrived by bus at the Palanca crossing on Moldova’s border with Ukraine on 23 April 2022.

“The United Nations is doing everything in its power to support people whose lives have been overturned by the war.” UN Secretary-General António Guterres, 28 March 2022

What is the United Nations doing to help people in and outside of Ukraine? Secondary school students from around Austria joined an online briefing with experts from various Vienna based UN bodies to answer exactly this question.

6. April 2022. The “senseless” war in Ukraine has now reached its fifth week. It has led to the displacement of more than ten million people and a refugee crisis across Europe. The United Nations is leading the humanitarian response with more than 1,000 UN personnel on the ground ensuring the safe passage of aid convoys and refugee corridors, as well as providing medical supplies, food rations, blankets, kettles and other basic household items. As of 31 March, UN agencies and their humanitarian partners have been able to reach more than 1.4 million people with lifesaving, multi-sectoral assistance. However, as more than 4.1 million Ukrainians, a quarter of the population, have had to flee their homes and a further 6.5 million people have been displaced internally within Ukraine, questions about the work of the UN have started to arise.

To help answer some of these questions by students and teachers, UNIS Vienna, in cooperation with Kirchliche Pädagogische Hochschule Wien/Krems and Modell ONU, organized an online briefing. The panel was well equipped to respond to these questions with representatives from various UN bodies with a wide range of experience and expertise. The event began with opening remarks from Stefan Lamprechter, KPH Wien/Krems, which was followed by a short opening summary by UNIS Director Martin Nesirky on the humanitarian and political response to the Ukraine crisis. Nesirky thanked the speakers for their attendance and praised their efforts towards the humanitarian response in Ukraine.

Ruth Schoeffl, Spokesperson for the UN High Commissioner for Refugees (UNHCR) in Austria, talked about the work of the UN Refugee Agency and their support for those who have fled from conflict in their country. Noting that “this is the first time since the Second World War that, in Europe, there are this many refugees,” Schoeffl told us about a memory that had stuck in her mind of meeting a mother and her young son on his birthday in a reception centre in Vienna. The mother told her that she had ordered a bike for her son’s birthday three weeks before, as she truly did not believe a war would break out.

Joe Lowry, Senior Media and Communication Officer and Spokesperson of the Regional Office for South-Eastern Europe, Eastern Europe and Central Asia of the International Organization for Migration (IOM) reflected on his short mission to Moldova and his personal connection to Ukraine. After asking the students what they think the most important items for refugees are, with varying responses, Lowry described his experience of “shattered” communities and towns left “in rubble”. Silke Albert, Project Coordinator of the Human Trafficking and Migrant Smuggling Section at the United Nations Office on Drugs and Crime (UNODC), explained what human trafficking is as defined by international law and spoke about the heightened risk of human trafficking for refugees in flight from conflict areas as “human traffickers love chaos”. She also stressed the importance of working together in the global community: “Because human trafficking happens mostly across borders, it is very important that legislation is harmonized.”

Following each speaker there was a round of questions and answers. The audience was encouraged to engage as much as possible with the speakers and the topic, ranging from the protection and support to non-Ukrainian people fleeing the country to questions on the veto powers in the Security Council.