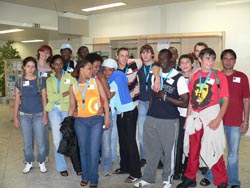 of unaccompanied young refugees and asylum seekers living in Austria to visit the United Nations Headquarters at the Vienna International Centre (VIC) tomorrow (11 August) at 13:30 hours.

The theme for this year's International Youth Day, observed on 12 August, is "Tackling Poverty together". At the centre of youth poverty is the need to address widespread youth unemployment. Young people between 15 and 24 are a quarter of the world's working population but they make up half its unemployed today.

In his message for International Youth Day, United Nations Secretary-General Kofi Annan said:  "The world's young people, now numbering more than 1 billion, are a major human resource for development, and can be key agents of innovation and positive social change. Yet the scale of youth poverty robs the world of that potential. In a world of great riches, nearly one in five people between the ages of 15 and 24 must eke out an existence on less than one dollar per day, and almost half live on less than two dollars per day." 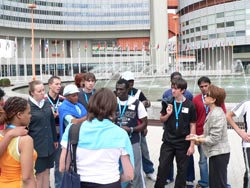 A group of 20 young people who live at the SOS Menschenrechte (Human Rights) homes for young refugees at Traiskirchen near Vienna, have been invited to the VIC for a free guided tour of the building which is home to the United Nations Office at Vienna (UNOV) and other agencies and organizations of the UN system including the International Atomic Energy Agency (IAEA) and the United Nations Industrial Development Organization (UNIDO).

The youths aged 14-18 come from a range of places including Chechnya, Guinea, Nigeria, and the Republic of Moldova. They are staying at the two Clearing Centres for unaccompanied minors run by the Austrian non-governmental organization, SOS Menschenrechte (Human Rights). The staff at the homes guide and support the young people through the initial stages of the asylum process. On average they stay at the homes for six weeks and then go to other refugee accommodation or to live with families depending on their needs. From January to June 2006, SOS Menschenrechte (Human Rights) looked after 266 young people from 38 countries. 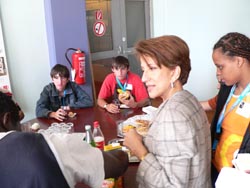 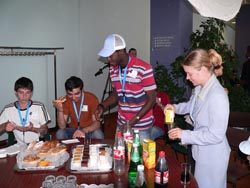 and been separated from their families. Some have been helped to leave their country after their parents have died, gone missing or been imprisoned, others have been sent by their parents for the children's own safety.

The young people will go on the guided tour of the VIC, see a film about the work of the United Nations and meet the UNIS Director, Nasra Hassan. Refreshments will be provided by UNIS and the VIC Catering Service.

The United Nations General Assembly declared 12 August as the International Youth Day in December 1999.  The day serves to showcase the work of young people while drawing attention to the challenges they face.