VIENNA, 3 November (UN Information Service) - The Austrian winner of the 2014 Eurovision Song Contest, Conchita Wurst, and the United Nations Secretary-General, Ban Ki-moon, have spoken of the need for respect and tolerance for everyone at an event today at the Vienna International Centre (VIC). The singer performed live in the presence of the Secretary-General and hundreds of UN staff, diplomats and members of civil society.

Speaking at the event the Secretary-General said he knew Conchita Wurst was the star of the world when she won the Eurovision Song Contest and turned her victory into an electrifying moment of human rights education. The Secretary-General said: "Conchita is promoting respect for diversity …. She confounds people's preconceived ideas of gender and sexuality - and she appeals to them to accept her as she is. That is a powerful message."

"As United Nations Secretary-General, I am proud to champion the cause of equality for all members of our human family no matter who they are or whom they love. I am resolved to lead by example, so this year I extended benefits to same sex partners of UN staff members. Discrimination has no place in the United Nations, nor in the world of the 21st Century."

Conchita Wurst said she was delighted to meet the Secretary-General and overwhelmed to see so many people at the event. She highlighted the need for respect and tolerance in her remarks to the audience at the VIC: "Unfortunately there are still many, many countries and people out there who think that human rights are just for some people and not for everybody but that's not true and we all know that. And also those people want to be respected. But I ask you, you need to respect us, to earn respect."

Conchita thanked the Secretary-General for his support for the Lesbian, Gay, Bisexual, Transgender and Intersex (LGBTI) community: "I think it's so important and I dream of a future where we don't have to talk about sexual orientation, the colour of your skin, or your religious beliefs."

Conchita sang her winning 2014 Eurovision song 'Rise like a Phoenix' and also 'Believe' in front of a packed audience in the Rotunda of the VIC.

Full-length video of the event is available online: https://www.youtube.com/watch?v=9nDL5P5W50Q&list=UUfMBw5CPjksYl6fuszlG8IA 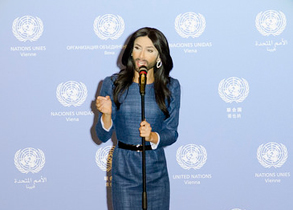 Photos of the Event

Full-length video of the event is available online