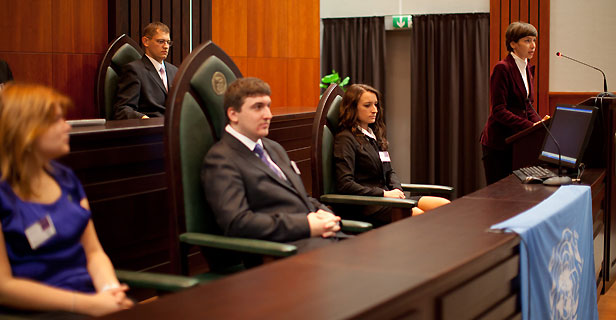 Students of the Pan-European University (PEU) as well as international students assembled for their first year session of BraMUN held in the premises of the Pan-European University, Bratislava, from 3 - 5 October 2013. Focusing primarily on the conflict in Syria, the students simulated the work of the General Assembly, the Security Council, the Human Rights Council and the Disarmament and Security Committee.

Vice-rector Slašťan stressed the importance of organizing Model United Nations Conferences as a source of knowledge and experience important for the future of students and encouraged them to keep it as a tradition. The Director of UNIS Vienna Janos Tisovszky reminded participants that Model UNs are not just games delinked from reality - but practical preparations for negotiations, for addressing common problems, for formulating common views on shared challenges and explained several ways how the delegates can stay connected with the world of the UN. Jana Vargovčíková of Amnesty International stressed the difficult conditions in Syria, arguing that more states should be actively helping Syrian refugees, and Mr. Vĕtrovský gave a brief analysis of legal aspects of the situation in Syria.

BraMUN 2013 is the first ever Model UN Conference at the University level in Slovakia, organized by students of the Slovak branch of the International Law Students Association (ILSA), in cooperation with UNIS Vienna.